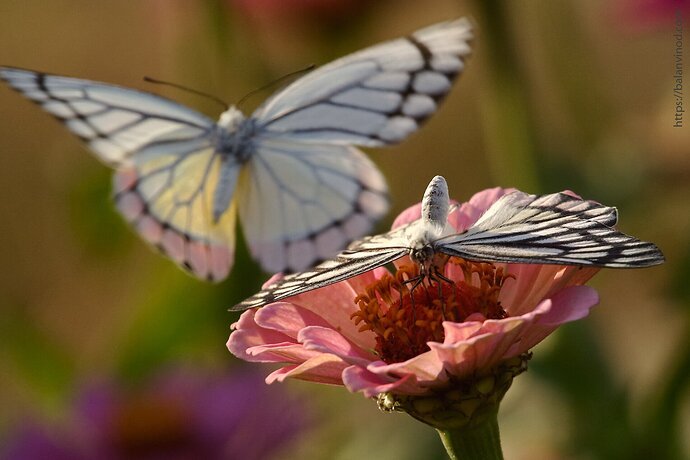 I wanted go off the spiders this week, and dug out this one. This infact is a mating ritual of the butterflies. The Common Jezebel.

What a lovely species. You’re lucky to have them being so active for you. Being that they can be so difficult to shoot because of their movement you did fairly well. Too bad about the clipped wing on the left. And I’d like to see the tops of those wonderful wings. Maybe they’ll give you an encore performance!

Balan, I was enjoying your spider images, but this is a good subject as well. Nice job capturing both of them in one shot. The one on the flower is nice and sharp, and an interesting pose. I love that you captured the second one where it is distinguishably the same type of butterfly, and you got it in flight with the wings out spread nicely. As @Kris_Smith mentioned, it would be good if you had the tip of the wing but it was moving and you had two BFs. I can even see yellow from a flower behind it showing through! The background is nice and colorful, yet smooth. I wonder if you could open up the shadows a bit, especially on the BF’s eyes (that’s on the flower). The eyes are everything and hers aren’t drawing the eye right now. I am impressed with this shot as presented though.

I was watching a Pieris species today and the female was raising her abdomen in a similar way seemingly to signal a Big No to her suitor. But she was deliberately trying to hide at the same time. Great catch of the two - that’s as sharp as you’ll get the second butterfly when it’s behind like that, especially in flight. And nice to see both sides of the wings of this species. Zinnias are great for butterflies, aren’t they?

Balan, this is a nice “twofer”. The transluncency of and subtle colors in the male’s wings are a treat. The mix of flower colors in the background also add to a warm feeling.