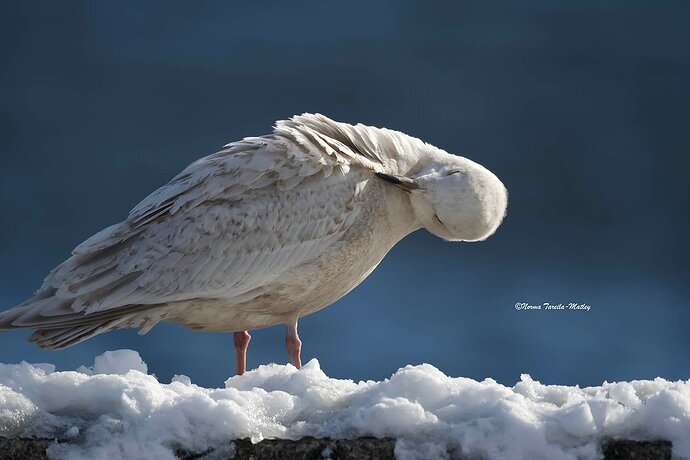 This is a rare visitor to the Merrimack Valley in Massachusetts. He landed in front of me on a snowbank and began to preen in the sunlight. He looked different all the other gulls near by so I focused in on him. It wasn’t until I got home and looked it up, Iceland Gull.

Wish I had gotten his tailfeathers. I did take the advise to up the shutter speed so exposure was ISO 160, 1250 Shutter Speed and F5/6. I am happy with the results. I like the way the sun light traces around his head.

I like your tail-less Iceland Gull, Norma. That nice winter blue background sets off the whites of the gull and the snow bank very nicely. The snow bank looks pretty good and for me makes this a very different/interesting Gull photo. I don’t see this species on the Southern Cal beaches and snow banks…never. I didn’t realize that my 500 mm lens would assist with my bird ids until I started shooting them and checking the field guides. No other shots of this one on the snow bank?

Thanks Stephen it was fun to see him and photograph him in the 30 degree weather here it had been in the single digits and we just got 12 inches of snow. Sometime it is not all about the technical stuff.

I agree with Stephen that the snow makes for an interesting gull photo. Nice pose and detail and I like the background.

Since you don’t have the tail, I wonder about cropping even more from the left, so the head is more prominent. The two legs make a crop somewhat awkward but it may be something to think about.

Now that’s a great species, and a rare vagrant for the Netherlands, although as I write this there’s some along the shorelines this week. The snow and pose make the image, I wish you had the tail. Hope you do have some images with the full bird, otherwise you could try Diane’s suggestion. Cheers, Hans

Thanks Hans, I do have more with the tail, I should post in the next few days.