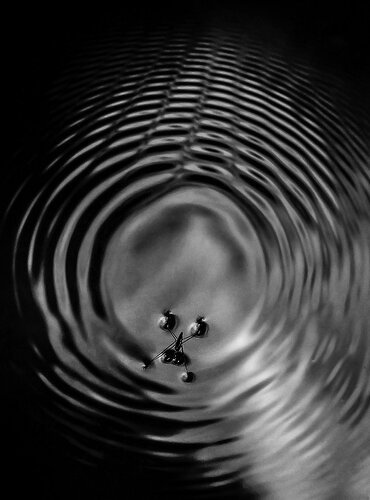 A Water Strider literally walks on water. Their legs are covered with thousands of microscopic hairs scored with tiny groves. These groves trap air, increasing water resistance of the their legs and overall buoyancy. The Water Strider’s legs are so buoyant that they can support fifteen times the insect’s weight without sinking. Even in a rainstorm, or in waves, the Strider stays afloat. Their legs are more buoyant than even ducks’ feathers. If a Water Strider’s legs go underwater, it’s very difficult for them to push to the surface and they will likely drown.

The buoyancy and paddling legs allow Striders to be very fast. A National Geographic article reports Striders are capable of “speeds of a hundred body lengths per second. To match them, a 6-foot-tall person would have to swim at over 400 miles an hour.”

Part of the “Water Music” series. In this series my goal was to show these “Water Striders” in their environment and the patterns and rhythms they made as they moved through the water.

Any feedback is most welcome. JT

John, I love the patterns in the water that this Strider is making. It is amazing. To me, it is a bit dark on my monitor, and when I review in the large version, it looks pretty noisy, so I am guessing that you were having to deal with less than ideal lighting. I am not familiar with the Olympus at all, but would image that you could bump up the ISO quite a bit above the 200 you used here, and allowed more light in with a higher f-stop. I really do like what you are doing with this series though. I like the info that you have provided about the Water Strider. I really do like the patterns in the water that he made in this shot more than the 2 previous ones. Looks like you were shooting from more over head, and that probably gave you more of the water pattern.

Very intriguing and wonderful patterns going on here John. Can’t imagine trying to photograph one of these. Nice job.

…he 200 you used here, and allowed more light in with a higher f-stop. I really do like what you are doing with this series though. I like the info that you have provided about the Water Strider. I really do like the patterns in the water that he made in this shot more than the 2 previous ones. Looks like you were shooting from more over head, and that probably gave you more of the water pattern.

Thanks Shirley for your input. Always helpful! I’m curious regarding your monitor. I’m not seeing any of the noise you mentioned. I’m viewing on a 32" 4K calibrated monitor. I also checked on a MacBook Pro and didn’t see any noise in the large version. The image is meant to be dark as I intended a more abstract vs literal interpretation. (Maybe too abstract?) The original is much lighter. If noise was a problem then raising the ISO in general creates more noise. This was especially true in 2004 when this photo was taken with a 5 megapixel camera.

What do you think of the original? 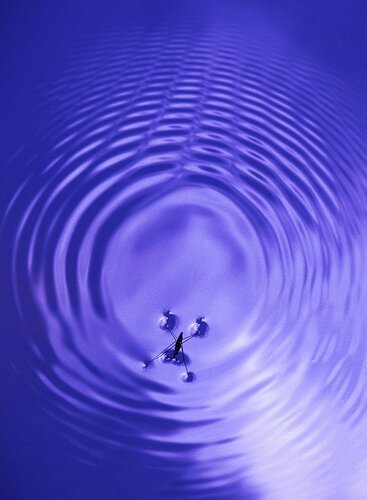 Very intriguing and wonderful patterns going on here John. Can’t imagine trying to photograph one of these. Nice job.

Thanks Linda. I appreciate your comments.

John, I sure don’t have that nice of a monitor. I do have old eyes, so maybe that is to blame!

Yes, you are right about the raising of the ISO. What I meant was, noise shouldn’t be a problem at ISO 200, and you should be able to raise it to a higher ISO to lighten the image more, having no idea that this was your creative vision, nor, that it was taken on a 5 megapixel camera so many years ago. So, never your mind my critique. I do like the color one that you submitted too. Very creative. If I ever get out near the water again, I will have to watch for these little guys. You have got me intrigued now.

Thanks Shirley! They are fascinating little creatures! If you do seek them out, I found that 1/200s froze the water just the right amount to capture the patterns.

John, the “zoom effect” of the ripples around the strider looks great. I have found that in color to b&w conversions, turning the blue tones into dark tones shows much more noise than similar changes in red or green. I’ve been advised to dramatically reduce the blues in the color version and then change to b&w. The result is significantly less noise.

Thanks Mark. Are you seeing the noise Shirley mentioned? The water is a little mottled but I’m not seeing noise.

John: I’m late to this party but this is my favorite of your water strider series. The water action around the strider is wonderful. I do see texture in the water but careful examination doesn’t show much if any noise on my monitor. I like the conversion and do prefer it to the color.

Thanks Bill for the input.

Thanks for the input David!

John, Appreciate the fantastic output you have achieved here. I remember making images of this kind, with the skaters. However did not get the tunneling effect that carries the viewer to the end of the frame. Beautiful craft.
Balan Vinod

Thanks so much Balan!