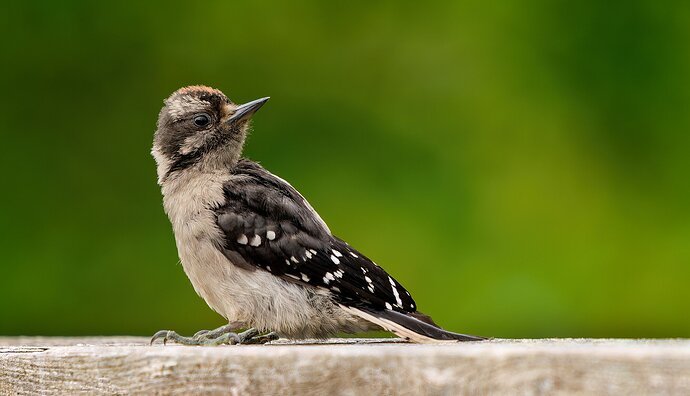 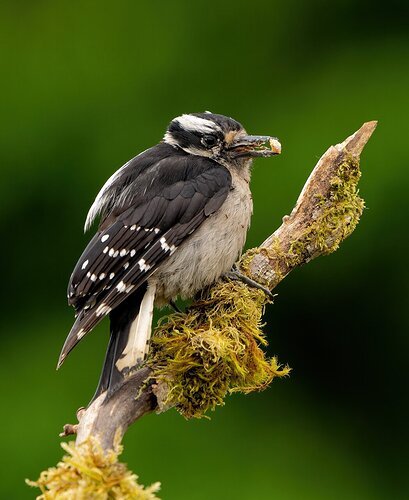 I think the first image is a male juvenile Hairy Woodpecker. The second image I think is a female Downey juvenile. I do have pictures of the adults but I will post those at another time.

Any
and does anybody really know the species of either of these?. The only difference between the Downey and the Hairy that I can determine is size.

The crest on the male is quite faint and I assume it’ll turn a more saturated read as it gets older. This might have some impact on the identification of these birds.

I can’t help with the ID but I certainly can do a thumbs up for both of these images! Lovely detail, wonderful soft light and BGs. I think a fairy swiped her magic wand over the BG on the first one!

Both terrific images, David. I would echo pretty much what @Diane_Miller noted.

As far as ID, you’re pretty much correct. The male Downy is the only one that gets the red crest. And yes, like most juveniles, the crest is less prominent than it will be later, but still visible.

As for Hairy vs. Downy, overall size is a factor, but the first thing I usually notice is the bill - if you can see it. The bill of a Hairy WP is much larger than a Downey’s.

Thanks for the offer of your box of Acorn Woodpeckers. That is one species I don’t have in my neighborhood. Of all the woodpeckers that I have in the woods (Downey, Hairy, Pileated, Red Bellied Sapsucker, and Flicker) across the street, the Flickers are probably the most problematic. They just bang on the metal chimney ducts. Once every couple of years, I have a Red Bellied Sapsucker that makes a mess of my mountain ash tree bark, I don’t appear to have any other woodpecker issues.

I’ll ship them with an RMA label. I’ll take an assortment of your choice in return. Other than Acorns, I’ve only seen an occasional Nuttalls here and a very shy Flicker.

Both images are excellent, David. The bill size is a good indicator in adults. The rule of thumb is that the bill is longer than the distance from the base of the bill to the back of the head in the Hairy and shorter in the Downy. Unfortunately, in a lot of bird species, the juveniles don’t have fully developed beaks when they fledge. I don’t know about these species. I do see in my old Peterson, mention under the Hairy that the juvenile may have an orange crown patch, so I think that’s what your first is. If you have the full 2x4 perch in the original, we might be able to put some dimensions on the bird.

Oh wow, these are great, David. I have never seen a juvenile woodpecker before. That must have been a real treat to see and photograph them. Wonderful details in both.