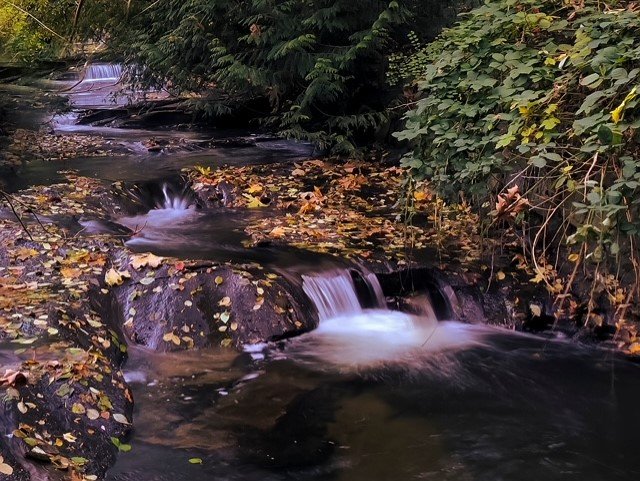 This is a location close to where I live. I like revisiting seasonally. This was in late Fall (obviously with all the retiring leaves). I think the fallen gave the image a little more than just a stream.

I like the S curves made by the meandering stream. I think the colour - the browns and greens against the live bush green somehow works. I think I captured the water slow enough to show a slight (?) blur, but fast enough to catch the detail in some of the water. I think it would have been a better shot if I captured some of the detail in the rock in the foreground and possibly under the last cascade (closest to foreground).

Unfortunately, I couldn’t find the EXIF data for this image. If I do, I will add it to this submission. It was from a few years ago. I think I shot it with an iPhone. Based on the clarity of the background, my guess is F11-16.

Hi Duncan,
Nice to see you back wit a shot of a place that looks like it would be worth a second visit. Not a bad composition here, but a bit heavy on the right with the big section of greenery. I don’t know what’s gone on with the colors, but I doubt the water was purple! I’d check that for sure - white balance gone kerflooey I think. The highlights are blown out as well, but sometimes that happens with phones and some the limits of control. If I’d been there I might have tried to move in lower and closer to the water and that lowest little cascade. Because of the color issues in the shot, my only emotional response is a bit of disappointment that it isn’t more realistic because it’s an inviting little spot.

This looks like a pleasing scene to have witnessed during your walk. It’s a restful place and that comes across in the image. There’s also a touch of sadness with all the fallen leaves. I agree with the technical issues Kris has brought up. One thing to consider is to have the edges be darker than the center. You have a lot of bright areas near the frame. But, yeah, the purple here really catches the eye.

Hey welcome back!
A couple of thoughts!

Hi Matt. Based on the critiques I’ve received so far, I think I’m going to try the suggestions and may paint in the leaves. It’s the same shot just a different time of year. Thoughts?

Looking forward to seeing it!

Thanks for posting and sharing your image. I think this is quite nicely composed. Even the larger presence of the greenery UR doesn’t bother me so much because there is some variation in detail.
A quiet scene and I like the near-square crop.

I’ll echo the technical points by others, especially the color of the water, and wet areas by the creek. As well as the blown highlight in the water. Pretty sure simply the limitation of the cell phone.

And other than burning down the brighter areas on the left, leaves/rock left edge and fall color ULC, upper left corner, I think this is lovely.