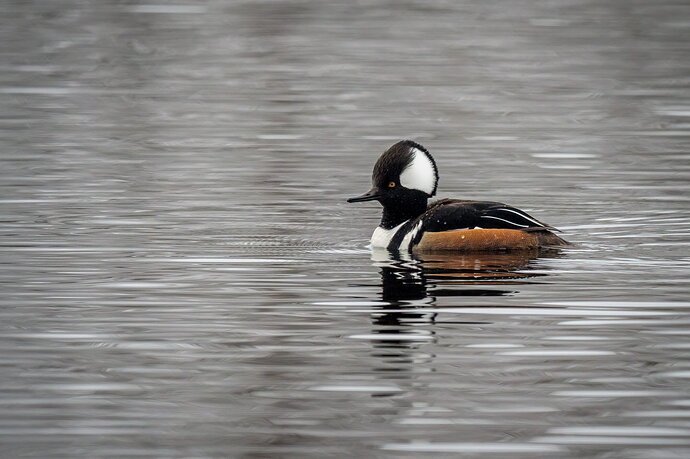 This time of year tons of waterfowl hang out on the river. I had a wander down to the dock to see what was around and I saw this hooded merganser way out in mid channel. Kind of a speck in the scene even with the lens cranked out to 400mm. So I settled down to see if he’d come closer. He was kind of drifting in the current, but then he turned and started coming my way. Even though my jacket was a bright color he didn’t seem to find me threatening and came within a few dozen yards/meters. Now the 400mm end pulled him close. It took a few minutes so it’s good that I can hold a deep squat for a long time.

The eye is very difficult to see at certain angles so no cool head turns, plus the light was kind of flat due to overcast skies. But I like it anyway. The focus is pretty good and the exposure decent. Neither is perfect, but I’m working on it. I should have dialed in a bit of + exposure to get this right. I will next time. And bring my 5-gallon bucket seat!

Any advice for improving field technique or processing welcome.

Is this a composite: No
Handheld. 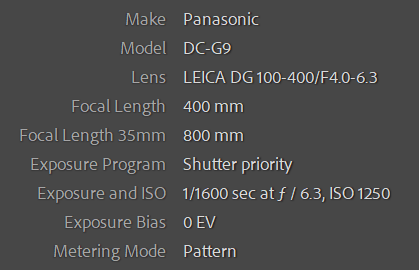 Lr for initial crop, lens correction and basic adjustments including masking the bird to bring up exposure on him, but not the water. Some texture & clarity, sharpening and nr before sending to Topaz Sharpen AI to pull up some detail which it did and it knocked down the noise even more.

Interestingly, I find that doing a little sharpening and noise reduction to the RAW file before sending it to Topaz gives me much better results. I find that having to do Denoise first then Sharpen makes things too crispy. Sending an image without NR or Sharpening to Sharpen only doesn’t remove as much noise as sending a slightly corrected version. Hm. So many workflow tutorials say to just send it over without those adjustments. YMMV.

Hi Kris, this is a really nice image of the Merganser. I think the comp is fine and I know what you mean about the eyes needing some reflected light to be seen. Overcast makes for a soft light where you can pick up all the colors and tones. And it’s what I live with most of the year here in the Pacific Northwest.

Can’t speak to the processing specifics since I don’t have the Topaz products, but it looks quite fine to me.

Very good, Chris. I took a bunch of images of one last Friday and didn’t get anything this good. The whites on the head are very difficult as the feathers are extremely fine, but this looks fine to me.

Thanks @David_Bostock & @Dennis_Plank - they are wily little guys and so I’m pleased he came so close. Am going to see if I can get any more tomorrow. Similar conditions as today except without the fresh snow.

Lovely shot, Kris. I tend to follow @Diane_Miller in applying nr and sharpening (Topaz Denoise and Sharpen) only in the PS stage. Have you played around with all the variations of NR and sharpening allowed within the 3 modules of both these tools? Sometimes I can lower the “crispiness” you mention by doing this. That said, I don’t have LR and only use ACR - but I’ll try your approach in ACR initially and see how it goes.

Cool shot! Good tonal detail and sharpness, with the whites looking great. They are featureless but don’t have that blown-out look with a defined edge where whites fall off the cliff. I’ve about missed duck hunting season here – got to quit being too busy to play!

Interesting thoughts about NR and sharpening. The answer is – whatever works. I think I’ve been too programmed by the idea of don’t mix methods, but I also think that may be outdated information. If I can get some time, I’ll try a mix of NR/sharpening in LR first (same algorithms as ACR) and then in PS. I have some low-light Bluebirds to try it on.

Thanks @Mike_Friel & @Diane_Miller - I’m not sure I’ve ever seen an “official” protocol from Topaz, but it seems the accepted wisdom is to send a file out of Lr as a TIF to either app without adjustments to sharpening or noise reduction. And I’ve done it that way with success, but I didn’t like the results in a different duck shot so I decided to see if I could make a start with the RAW file first. I’ll continue to mess with it as needed and see if I can see how best it works for me.

In terms of messing with the models in both Denoise and Sharpen - you bet I do. I also use the much improved masking to keep things where I want them. Most of the time the auto model is the one to go with, but not always and so I do check others to compare.

Just saw a woodie swim by, so hopefully this mist lifts and the conditions improve so I can sit by the river and wait.

Congrats on a fine capture of your first hoodie. A nice regal pose with good handling of blacks and whites.

Very nice Kris, can see the overcast flat light but still a fine shot of a unique looking duck. Nice when they get curious and come in for a look at us isn’t it? It makes things a little easier. I often use a small tripod stool that I can strap over my shoulder while I sit and wait.

Thanks guys. I have to hone my patience, but for this kind of reward it’s worth it. No dice today since it was cold and windy. Now it’s raining and will for most of tomorrow.

Congrats, Kristen with your first Hoodie and a nice shot on top! I do love mostly the monochrome surroundings, which make the bird stand out nicely. Also, the patterns in water have a certain appeal. So, all in all, very nice ! Cheers, Hans

Thanks @Hans_Overduin - it was a breezy so the water was ripply. I felt it worked here, too, and kept the exposure there fairly low so as not to compete with his handsomeness. While making coffee just now I watched 1/2 dozen geese and swans swim up river. I think they’re starting to get restless for their nesting sites. Hopefully most of them thaw this week with the higher temps and rain.