Sony A77II
Sony 70-400G @ 100mm
ISO 800, 1/500 @ f5.6
In the late summer of 2017 Chrissy and I checked off a bucket list item by taking a small ship cruise out of Juneau. We were on a boat much like the one in the image. We had left Houston two days before Hurricane Harvey inundated the city and had spent about ten days on the mainland before boarding our boat. Another couple on our boat was from Houston also but were unable to get out of the city as they had planned and arrived in Juneau without their luggage and no time to pick up replacements. Our cruise line (Uncruise Adventures) was able to pick up their luggage a couple days after our departure and was able to arrange a rendezvous with the Safari Explorer to deliver their belongings. I thought it was a really nice touch and the icing on the cake was that just after we met our sister ship we were treated to a pair of Orcas escorting us up the channel. I’ll probably bore everyone this week with entries as we were on kayaks almost every day and the ship itself got into some really beautiful areas inaccessible by large ships. All comments welcome. >=))> 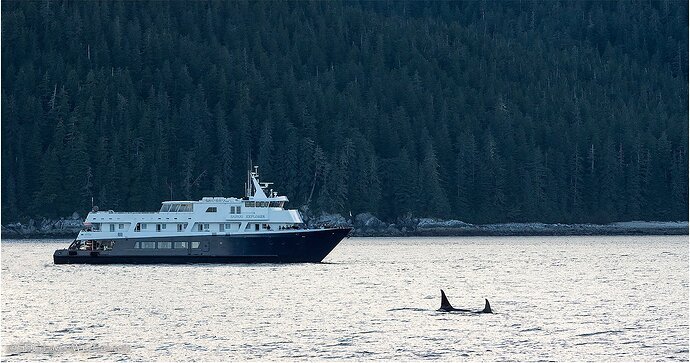 Bill, I enjoyed your story behind this image, as well as the image. Really nice of them to help the couple get their luggage, and really icing on the cake to see the 2 orcas to escort you up the channel. I would really love to go back to Alaska. Much better prepared to capture photos now, in knowledge and equipment.

Bill, both the Orcas and the cruise ship are set off well by the tree covered slope behind. Quite the background story as well.