There comes a time to stop processing and seek the views of others. There were four Osprey attempting to fish a small lake near our house and I wanted a shot of an Osprey hovering, peering down at the water. But, I liked the shots of the Osprey against the clouds. I came across a tutorial about using the background eraser in PS and thought I would try it here. It was more difficult than the tutorial made it seem and I’m sure I’ve missed some spots. Anyway, I changed the original blue sky background to one with clouds. 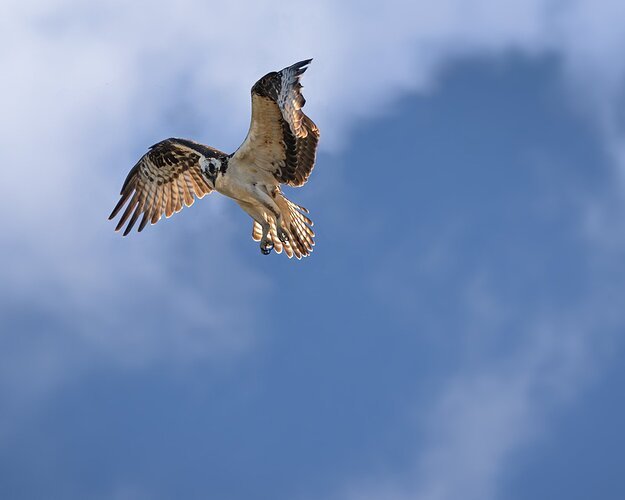 I think you did a good job on replacing the sky. I like the light shining through the wing feathers. And I like the position of the bird against the clouds. I have three Osprey in my area which seem to be hanging out and as with your image, most of the time I find them with a cloudless blue sky. If there are clouds in the area, I try to wait until they fly there but it isn’t always ideal. And they never seem to get as close as I would wish.

Good job on the sky replacement. I don’t see any issues, either. I like the pose, but it looks like you were fighting the light here. I’d personally prefer the bird be lit more from underneath or be more of a straight silhouette. My experience with ospreys is similar to David’s. Either the light or my distance to the bird always seems to be off.

The sun was behind the Osprey and the Osprey would face away from the sun in order to peer into the water and as I wanted a shot with the Osprey hovering I didn’t have a lot of options.

Whatever it is you did, I cannot notice it. If I understand correctly you replaced the sky - something I would probably not do since it’s too far away from my definition of photography, but hey

… Anyway, I like the hovering pose, however the head turn has the head at an angle where it sort of blends in with the body, which makes it a little hard to discern… Still, a nice image nevertheless and it must have been a thrill watching the bird hunt! Cheers, Hans