Pathways through the Redwoods 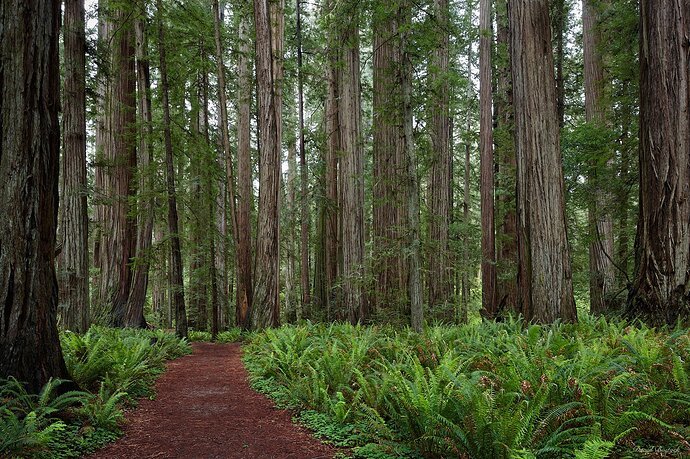 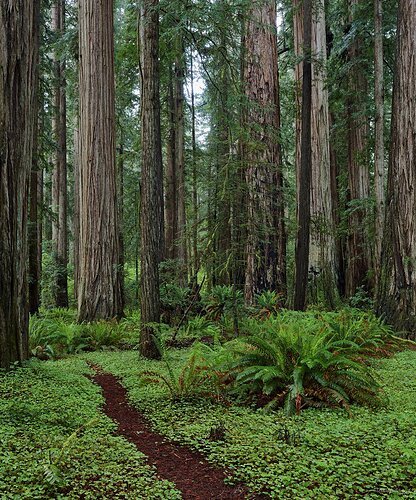 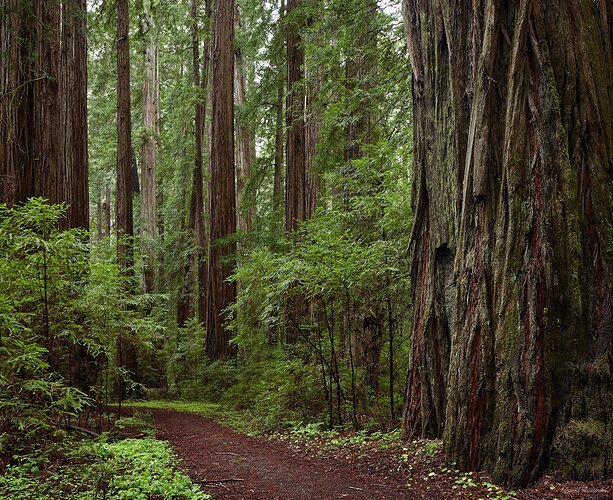 A couple of weeks ago we had some interesting discussions on forests and how to provide a bit of order in the seeming chaos. One of the ways I’ve found is to include a path in the image. Not only does it lead the eye, but it also adds a sense of depth. Of course it also adds a humanity aspect that some might feel takes away from the naturalness of the forest. Anyway, here are three images from the California Redwoods that include a path.

Does the path help, or does it take away from the image. Any other comments appreciated.

I think you’ve captured the look of the place very well with the luminosity and the color. I prefer the 2nd image the most for it’s composition. I noticed that all three images have their outside frame edges cutting through the trunks of trees. I usually work hard to have space between trunk and frame. It depends on the subject of course but in these cases I would have left space. In terms of preference it would be 2,3,1 for me.

Thanks for your comments, Igor. Much appreciated.

Many years ago, I attended a workshop in Olympic National Park. It was lead by a well known professional photographer who described a technique of using two trees on either side of the image as framing elements. In addition to framing the subject it was meant to help keep the viewer engaged in the scene. I still employ this technique from time to time, although I realize it’s not to everyone’s liking.

As far as an organizing element, a trail is a great one although I encourage people to go off trail when possible and use other things like fallen logs, big rocks or small clumps of things like ferns, saplings or wildflowers. But oh, a trail shot just pulls me in. The only thing that does it more is a boardwalk over a marshy bit.

The second one is fabulous because of where you placed those gorgeous ferns on the right. It is a more intimate view of what can be an overwhelming place. That said, I really like the third one because of that overwhelming tree. The vast scale of them is almost beyond our comprehension. Every time I visit a redwood forest I’m almost overcome with awe. Such a great series.

David, I really like these images and I actually think that the way you framed these with the tree trunks at the very edges of the frame works rather well. I’m assuming that it was deliberate and it serves a purpose. To me, the images, all with the similar framing, are presented to us like slices of the forest – think slices of cake, and everyone gets a slice… I don’t know if I’m making any sense but nonetheless, I think it’s cool.

Compositionally, I’m really liking the third image. I just love how the trail leads through the scene and at the very back, veers left behind the tree. The moment I saw that, I felt a surge of excitement and literally imagined myself running down the trail, like a little kid, just wanting to see and explore what’s behind that bend. It’s rare that an image connects with me on such a raw, emotional level and I think that images that can form such a strong connection with the viewer are the best kind of images. They’re far better than any grand scene that may be really pretty to look at but that the viewer doesn’t a feel part of.

My initial reaction was to favor no. 2., but after viewing all three for a while I changed to 3. It not only shows the massive size of the trees but also better indicates their height (2 obviously shows height better, but not overall size).

Three terrific captures of the redwoods David. This is a very tough place to shoot because the size of the trees and the number of trees is staggering so getting a good composition is really difficult. Using trails as leading lines is one of the ways lead the eye through the scene and also it clears a path and reduces the chaos in forest scenes so well. In the redwoods, I have seen some photographers that actually use people to give a sense of scale because otherwise, you just don’t get that sense of the size of these trees. They are truly awe inspiring and the only real way to show that is by having something of known size for scale.
In all three of your images you have nice soft, muted light which is almost a necessity there. I feel like the first image would be my favorite if you had placed the trail more to the right so it’s not so left side heavy. Or, you could actually crop to a portrait view in the first image and have that path lead straight down the middle of the scene. I’ve cropped it this way so you can see the difference. I like the third image because of the sense of mystery about where the trail goes and I like the second image because of the placement of the giant fern. Thanks for posting these David. 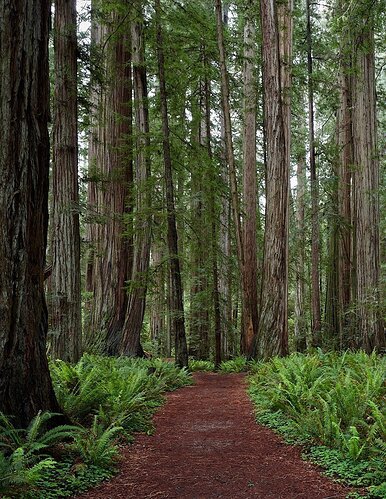 Each of these work wonderfully - each in their own way. I think you made an excellent choice to simplify the otherwise chaotic redwood forest, but including the path. The colors, light and overall processing look great.

Might be hard pressed to pick a favorite, and I know you didn’t specifically ask… but I too am leaning towards the third image. This image showcases the sheer size of the main redwood and the composure includes all the supporting forest, the new growth, the forest floor… this image puts it all together very nicely. Oh, and the path provides the impression of “wondering in the woods”, which include the mystery sense of the path veering off in to… somewhere.

First images shows the forest nicely and the path works to pull the viewer in to the frame. I don’t mind the path off center. I think it’s held in check by the strong redwood on left. Only nit here and I could be off… but it feels like this needs a little CW rotation. Despite the left tree being perfectly straight, (and yes, MOST all trees in a forest - are NOT all vertical, I get that.) But,the majority of trees in the center/back of the frame appear to be leaning a little. Not a huge deal and for all I know, they’re leaning that way!

The second image is kind of a blend between the other two. The path in this one I think is the least effective. The path ends, with apparently no direction to continue in the frame. Not a biggie either, but if I’m picking… I pick #3.

All are wonderful examples of how to tame the chaos in the forest.

I think the third image gives the best sense of place. It captured the grandeur of the Redwoods. That said I also like the second one as well. They both have the path curve out of the frame which adds mystery to the images. They invite the viewer to step on the trail and discover where the trail goes and enjoy the magical forest. They both have good composition and is excellent technically. The first image lacks an interesting foreground and the forest does not speak to me of Redwoods. The trail is not that interesting straight line. The second two, spot on.

I often struggle to find order out of the chaotic nature of forest scenes so I’m always appreciative of those who compose those scenes well. I agree that using a path can be a way to bring order to the scene, although I rarely use this approach for my own work as I generally prefer not to include man-made elements in my photography. That said, that is my personal preference. I think that you have used the path well in this scene. I like the third image the most as the path not only leads me into the scene, but it evokes curiosity as to where the path leads once it curves out of the frame to the left.