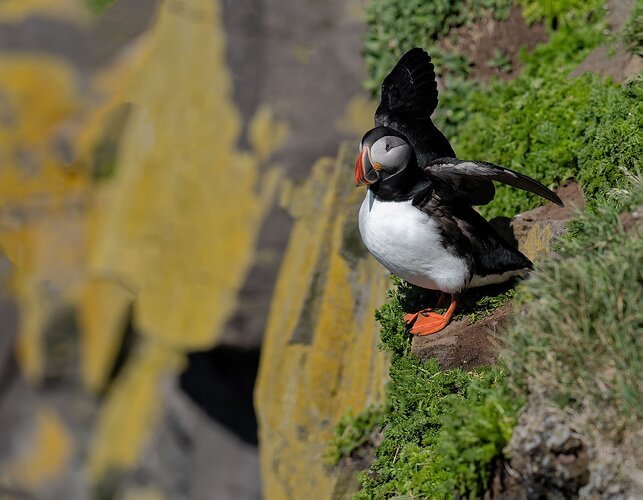 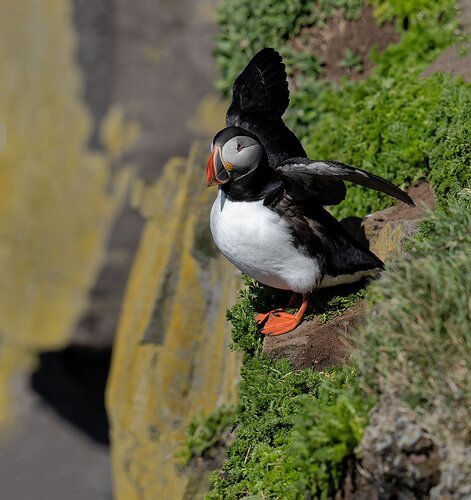 Another cliff photo. This had bright sun behind my back and it was probably approaching mid day based on the shadows I’m seeing. Although this area is well known for many puffins, common mueures, razorbills, fulmar’s, and other cliff/shoreline based seabirds, the puffins are always an attraction. But there are many places in Iceland where there are many more with respect to density. This place is just easier to get to. And yes, they unload the tourist buses just to see the puffins. I suppose getting there is half the fun because the roads are gravel and quite bumpy. A several hour drive from any reasonable village.

Any concerns about the exposure on the bright plumage?

Gorgeous view of the Puffin. Looks a bit precarious- for you, not the Puffin. The yellow in the left upper quadrant does draw my eye a bit; not sure a vertical crop would work, though.

A wonderful and unusual catch – worth the trouble! I think I’d play with less saturation on the BG, but not the part closest to the bird but the next face to the left.

I wonder if the bird could have more detail in darks and lights. Have you done what you can with Shadows and Highlights in raw conversion? Sometimes starting with a linear profile can help.

A beautiful shot of the puffin, David. The bright green moss on the background rocks to the left does tend to draw my eye a bit.

Nice shot, David. To be honest, I do not mind the occasional blown whites - as long as it’s not too much, and in this case there’s enough detail in de bird. So, in short, fine for me. I tend to look at an image like this much more in terms of the overall feel in renders, and the surrounding cliffs add much to this wonderful bird ! If I had to mention one thing I wish to see different, it would be the shadow of the bill. Maybe you have shots from the same series, where the bird has it’s head turned a bit so the shadow is not there anymore? Anyway, I do like it as presented ! Cheers, Hans