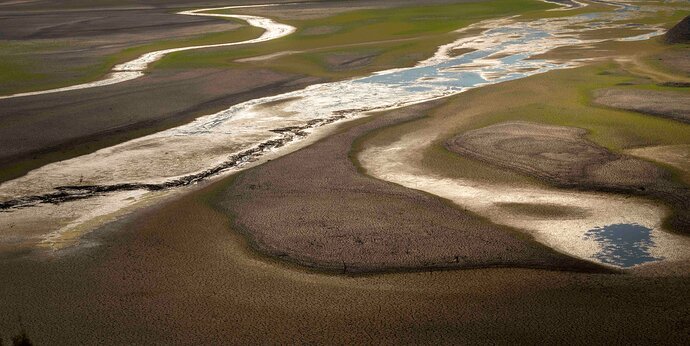 Traveling to the west coast this fall, I stopped at several reservoirs. They were all desperately low on water. The drought is real. I formed a series of images I call Reservoir Boggs. This is the first. The highlights are fairly blown…but I like it that way.

My biggest concern is the composition. Is the dominate diagonal line too dominant? Also, I originally cloned out the triangle rock in the upper right. However, I left it in in this version, as I think it balances the dark areas around the puddle below.

However, the green grass is a little scary because that means it’s been exposed to air for too long.

The good news is that in some parts of the west coast has had a lot of rain lately but I don’t know if that has effected the area shown in your image.

Any updates on current conditions?

Janine, the bright water looks very good here and acts as an eye magnet pulling my eyes to multiple places throughout the view. The greens make a fine contrast to both the water and the browns. The triangular bit of land in the upper right doesn’t bother me. In the large view, the cracked mud with its subtle colors shows well as it adds context. You might clone out the tree tops in the lower left corner.