I would appreciate any and all critiques, comments, suggestions, or opinions. 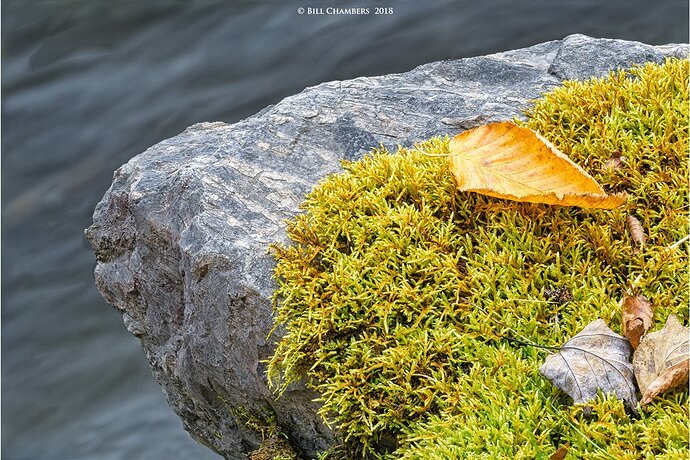 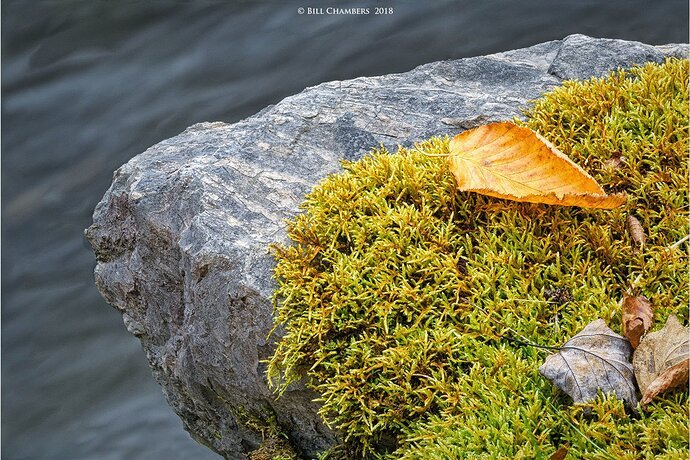 Good eye to spot this Bill. My favorite part is the rock itself, the sharp details in the rock - and then placed against the soft running water below. The moss/leaf add nice color but I’m not sure about the amount of space given to the moss. But I’m not seeing a clean crop. I do think that the LRC could be burned down a little as my eye is drawn to the brighter leaves in that corner - keeping me away from the rock.

I do like the visual contrast between the rock and the moss - as you already mentioned that is what attracted you in the first place!

Works nicely, Bill. You’re so good at spotting comps like this. Most photographers (myself included) would miss this entirely.

Nice composition here Bill, I like the arrangement of all of your elements within the scene, and the square crop works well with them. On my monitor, it looks a little bright YMMV, and i might considder dropping the exposure 1/3 of a stop. And i think even after doing that, it could benefit from adding a vignette.

What I like most about this is the 3 dimensional look to it. Each layer stands apart from the other. Layered compositions usually get part of their beauty by flattening space.

I do think the moss is too bright. Perhaps it’s because we’re used to seeing it grow in the shade.

A very nice image. I think that if you darkened the moss slightly then it should improve the comp. The difference between water, rock, moss, and leaves makes this work…Jim

Thanks all for your comments and suggestions. I took your suggestions and burned the moss a bit, and I took Ed’s suggestion and added a light vignette. I’m all ears if you have any further suggestions.

Looks good Bill! The burning in of the moss removed that eye catching glow. Well done…Jim