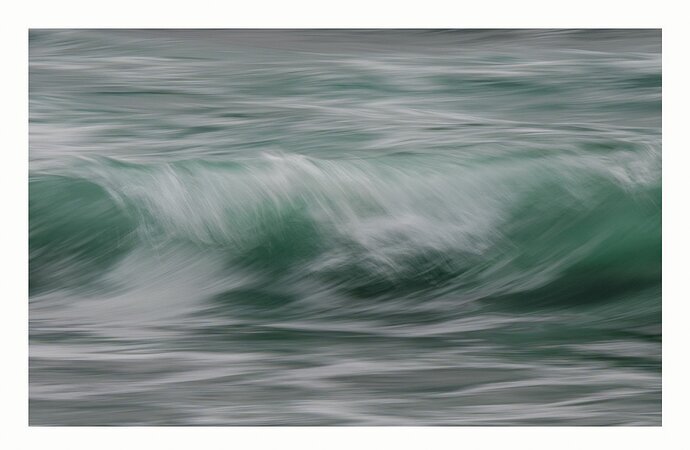 I shot this image using a technique developed by Mark Metternich where he uses a 70-200mm lens to zoom into incoming waves just as they’re cascading. He uses a relatively slow shutter speed and he also pans horizontally. I have tried this on several different trips with generally no success. It’s more difficult than it sounds and I think it has a lot to do with luck in my case. I’m sure Mark is much more proficient than I am at getting keepers. This was mid day so I had to use a 6 stop NDF as well as stopping down to f/18 and ISO 31 to get 1/10 of a second which is about where you want to be. It’s generally better to shoot these shots on a cloudy day at sunrise or sunset so you don’t have as much light and you can get some reflected sky colors.
Anyway, after taking over 2000 shots on this particular day I came away with perhaps a keeper. I’d like to hear your thoughts on whether this image works or not. I plan to keep trying either way.

Does this work or should I go back to the drawing board?
Is the shutter speed about right? I want texture in the wave but not the background or the foreground and I want the wave slightly blurry.

David, all the elements in your image work together perfectly to my eye. I especially appreciate the feel of ongoing motion you convey here. The rather centered position of the wave within the frame adds a kind of stableness to the otherwise dynamic composition that just makes the difference for me. Furthermore, I like your careful treatment of colors a lot. Thanks for sharing.

This works very well. I might be inclined to crop down to eliminate the darker band along the top, but otherwise, the processing looks good.

I hear you @Harley_Goldman about the 2000 images. It’s mostly because for each wave that you photograph you can capture anywhere between 5-15 images as the wave approaches and how long the curl/break lasts. It’s a nightmare to go trough all of them afterwards. Quite the pain. Trying to determine if it’s worth it but if you go to Mark’s website he has some really beautiful images and he is now completely addicted to these types of shots. I have a long way to go to duplicate one of his shots but I find them really beautiful, so I keep trying. Glad it works for you and I agree about the dak band along the top.
Thanks @Peter_Richter for your thoughts on this. I’m glad it works for you too. Colors were pretty much left alone except for a little bit of contrast that made them pop just a smidge.

I love this photo.
It really sound strange when you get, and have to go trough 2000 images. It happens sometimes to me in situations like that.
I did some tweaking with your photos, mainly a bigger crop - witch is may main concern, and some very small color. 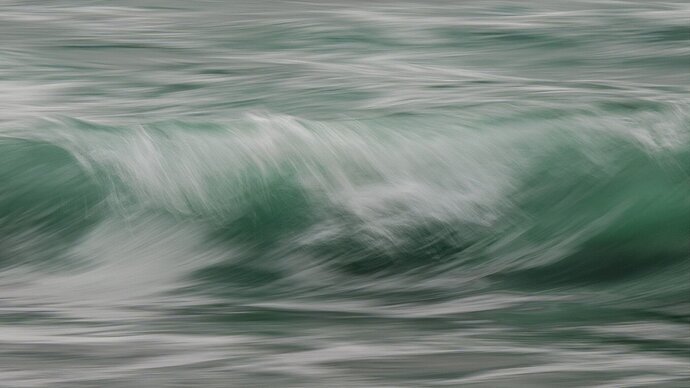 Nicely done, David. I, too, like using this technique and am also trying to improve my successful shot percentage.

I would be grateful if you would post a link to Metternich’s technique. I am not familiar with it and have little to go on as to how successful this is.

Thanks very much @Harley_Goldman , @Peter_Richter , @joaoquintela , @Izzy , @Igor_Doncov for your comments and suggestions. I am sharing a link to Mark’s web page for those of you who may be interested in the technique that Mark uses for these types of seascapes. In addition, check out his gallery. Mark is one of the worlds premier landscape photographers.
https://www.markmetternich.com/

Wow, I really like this David. I’ve seen a few images like this before and it makes me want to be able to go to the ocean and try this technique. I think it’s a keeper! I can see it big on a wall.

I’d say you succeeded in your goals - this works for me. Feels like the shutter speed was right for the effect you were trying for. The angular energy of the crashing wave is nicely framed by the horizontals in the sea above and below. I’m thinking you want the crashing wave to be more prominent in the frame. Not sure how you processed this, but did you do any targeted exposure adjustments? I gave it a go, brightening the crashing wave and darkening/lowering clarity & texture on the horizontal parts. I’m impressed at your efforts! I’d say this is a keeper. 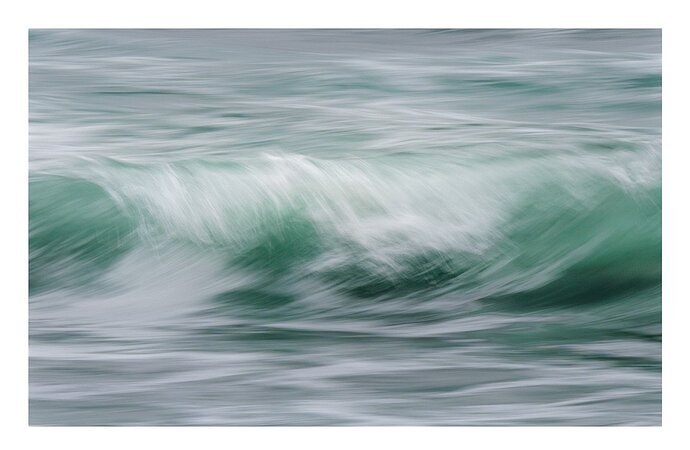 Thanks very much for your comments @Vanessa_Hill. I’m glad this was a keeper for you. I know I can do better but this is a start for me.

Thanks for the rework @Bonnie_Lampley . It’s a major improvement. I will rework the image with your suggestions in mind. Thanks so much for taking the time to share with me.

He uses a relatively slow shutter speed and he also pans horizontally. I have tried this on several different trips with generally no success. It’s more difficult than it sounds

And it sounds difficult, so actually doing it must be really hard.

Anyway, after taking over 2000 shots on this particular day I came away with perhaps a keeper.

It’s a good thing you are shooting digital instead of film, otherwise you would be bankrupt

Just the thought of downloading and culling 2,000 images makes my head spin.

With that said, I find the effect to be very interesting and really neat looking. The combination of various directions of motion in the waves works really well in this one, and keeps my eye sweeping across the image. It’s a matter of personal taste but I might prefer a bit more brightness and color saturation in the greens, i think you could add a slight bit of both without going over the top.

Thanks @Ed_McGuirk . Did you see the redo that @Bonnie_Lampley did? It’s just what you are talking abut and a major improvement.
Yep, 2000 images with film would definitely bankrupt me. No fun culling through those either. But, I’ll attempt this again sometime.

This is a really cool shot. Thanks for sharing this technique David. I’ll have to remember to give it a go when I get near the ocean again. Might even try something similar on a fast running river just for grins.