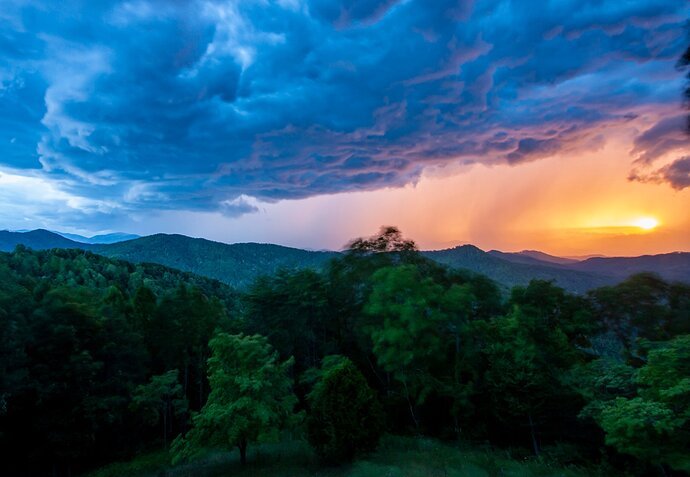 Trying to learn something from one of my older failed images, I tried to capture this storm at sunset back in 2008 with my Canon 40D (10mp), I shot it at ISO 200, 10mm, f10, 1.6s. I remember the scene was quite dark and the wind was really whipping the trees back and forth. My knowledge at the time I was trying to keep the noise down by picking ISO 200, f10 for depth and sharpness which then necessitated the long shutter speed. I only shot 3 frames of this storm but I wish I had tried harder. I hope I have learned a few techniques since then and I guess if this scene presented itself to me now I would think of shooting a bracketed image. Perhaps bumping up the ISO on my Fujifilm XT2 and increasing the shutter speed to stop the motion of the trees and then changing the exposure to capture the sky and finally blending it in Photoshop. Curious how you all might have approached it, maybe a graduated ND8 filter would have allowed a single capture, however the horizon is not level or straight so not sure if that would work. Anyway thanks for your comments.

Christopher, welcome to NPN, this is a fine first post, with it’s dramatic sky and moving trees in the foreground. I think your long shutter captures the drama nicely by showing the motion of the trees in the foreground. I do think that the colors are oversaturated (which can often happen with a dark image using Adobe software), especially the deep blue of the clouds. The tiny bits of black along the upper right edge are a distraction that don’t add to the story. Sadly, you can’t plan to redo events like this, but should the opportunity arise, I’d suggest having a bit more open space along the bottom, that would give the moving trees in the foreground a bit more emphasis, adding to the sense of storm.

I look forward to more posts from you as well as your comments on the posts by other members.

Thanks for comments @Mark_Seaver, appreciate it, I will be mindful of my contrast and saturation adjustments in the future.