Sunrise on the Swallow Field &repost 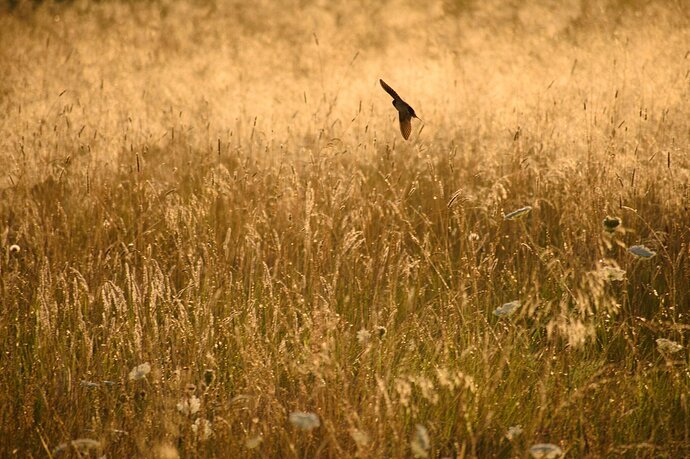 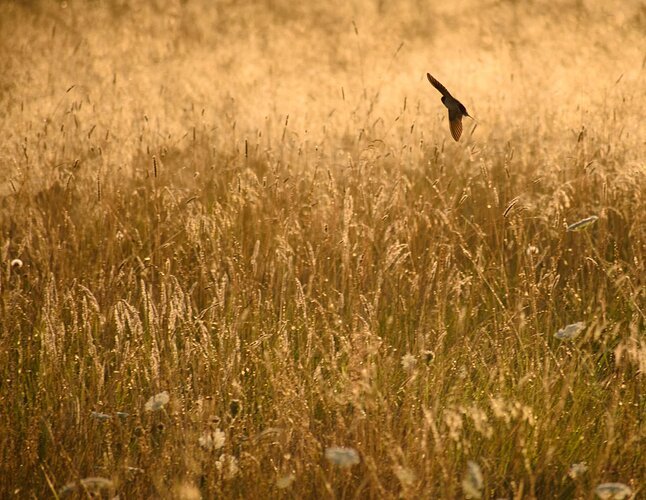 I’ve posted this field before as an ICM image. I’ve been coming to this field at different times of day a few times a week. The swallows love flying around it and I’m assuming catching bugs. I really love the way it looks and have wanted to get at least one swallow flying through it. Just 2 mornings ago I was able to get pretty close to my vision, not quite, but wanted to show what I’m trying to do.

Any thoughts, ideas, feedback. I’m shooting to the right of the sun rising. I would like thoughts on post processing, I haven’t done anything to it. I also have gone when the sun is behind me, but the swallows aren’t hunting then…they only start in the morning and are active through the afternoon.

I love this type of fields, but find it difficult to create good images. But you have been successful. I really like the softness and the colors of this image, and then the swallow! Due to the placement of the swallow in the vertical direction I would have tested to crop a little bit at the right edge.

It’s awesome that you keep going back to the field! It seems like a pretty fertile (heh) place for photography.

Agreed with Ola on the colors in the image! I also like that you left more room on the left side of the frame for the swallow to move into. The bird’s wings give it a nice sense of movement and its darker color contrasts nicely with the lighter color of the area of grass behind it. I’m not sure about the specific suggestion to crop on the right, but the swallow does feel like it is both a bit far away and a bit too close to the top edge for my liking. Those are just some thoughts, I’m not a birder so maybe they’re not that useful

Vanessa, I echo Ola’s thoughts. I like this image alot. I do think it would be additive to the composition to crop the left a bit .

I meant crop the right

I love the golden light you have captured here Vanessa! I think the bird is placed perfectly in the frame. The back lit grasses and water droplets are icing on the cake.

Thanks so much @Eva_McDermott for looking! I’m so glad you noticed the dew on the grasses! I love the way it lights up and glistens! I’m glad you like the position of the swallow. My goal is to get at least 2 in the frame and it turn out good! Thank you also @Ola_Jovall @Matthew_Chatham @Mario_Cornacchione for your input as well…going along with what you 3 mentioned about cropping it, I tried it and am curious about all your thoughts on that, even @Eva_McDermott who likes it as is! Thanks again for your time and interest!….

Vanessa, I do think this is a stronger composition, really like this image

I like the cropped version. The bird is nicely sharp but the grasses are either OOF or suffering from some camera shake, or both, so that they are not as lovely as they could be. Between the ss necessary for the bird and the DOF to get the setting, it’s a big challenge.

Vanessa, I do think this is a stronger composition, really like this image

I like the cropped version. The bird is nicely sharp but the grasses are either OOF or suffering from some camera shake, or both, so that they are not as lovely as they could be. Between the ss necessary for the bird and the DOF to get the setting, it’s a big challenge.

Yes @Diane_Miller that’s kind of what happens when I pan. Which is the best way I’ve found to keep up with and capture a darting, swooping, flying subject and it not be a blur!

I like the light, the colors and the position of the bird. Having the bird in silhouette against that lighter band of grasses really makes it pop out as a subject. I think the crop in the rework looks very good too.

The bird is nicely sharp but the grasses are either OOF or suffering from some camera shake, or both, so that they are not as lovely as they could be. Between the ss necessary for the bird and the DOF to get the setting, it’s a big challenge.

I’m likely beating a dead horse here, but would a tripod have helped ???

@Ed_McGuirk I guess a tripod would help if I was only pointing the camera at an exact spot and then pressing the shutter or remote at the exact moment the bird was there, but I wasn’t doing it that way. I did have an idea of where in general I wanted the bird to be in the frame and in the field so put my focus point there and made sure my settings looked good for the lighting on the field. But in order to get birds in flight and especially erratic flying ones I use the panning method which is always going to create a blur. I’m not sure how I would do that with a tripod. The lessons I’ve taken in that method are handheld and actually supposed to create a blur. I was focusing on and following the bird, so there are many frames to this shoot, kind of like a movie! Also I would expect that when you focus on something past your foreground the foreground would end up blurred. But to let you know, I am getting a tripod, you might not approve of it, but at least it’s something!

I think you have an image that is a hybrid of a landscape image, and an avian image. I’m not saying that in regard to what category you posted it in, that is a non-issue. But rather because some landscape photographers will look at this image and want to see more sharpness and definition in the grasses. Many avian photographers would look at this and say it was a good pan because the bird is sharp. It depends who the intended audience of the image is. Neither audience group is necessarily right nor wrong.

With that said, shooting from a tripod and bumping ISO would allow you to get fast shutter speeds, which would let you freeze the motion of the bird, while keeping more definition in the meadow grasses because you are not panning.