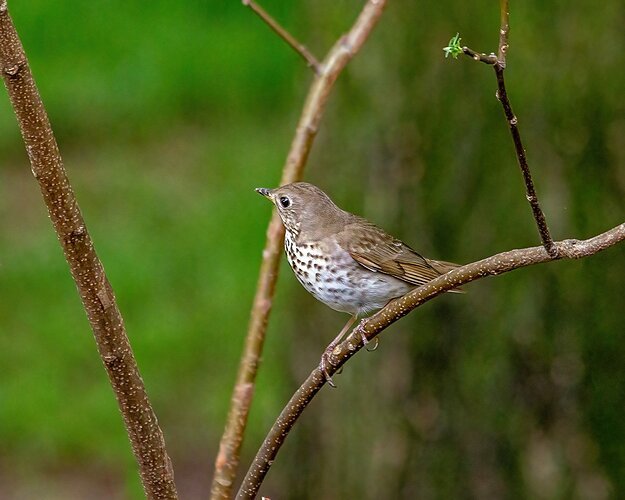 At least, I believe it’s a Swainson’s. The thrushes look so much alike; Wood, Hermit, Gray-cheeked. But his eye ring and the uniform color of his back leads me toward a Swainson’s. As with most of my photos, this one captured in my yard, this one sitting in a Wafer Ash.

Taking pictures in low light is always a challenge. I think you have some movement on the bird at the 250th of a second. I think your point of focus is okay; the detail behind the eye seems to be blurred a bit which I attribute to the lower shutter speed. I think it’s always a challenge to balance ISO, shutter speed, and aperture. In this case, bumping up the aperture to F8 and the ISO to perhaps 2000 with a 500 shutter speed would have given you a sharper bird with the trade-off of more noise. Topaz should be able to handle ISO 2000. As I am unfamiliar with your camera, I cannot give you any advice with respect to image quality.

This looks pretty good to me. If I recall, the 60D wasn’t known for it’s high iso capability, so iso 1000 is probably a reasonable maximum, though modern software might be able to handle it higher if the exposure is correct. It looks like a Swainson’s to me, but that’s the only one of the three species you mentioned that I tend to see and there are usually minor plumage variations between the Pacific Northwest and elsewhere.

I wish the head weren’t in front of the out of focus branch. I don’t know if your setup allows a bit of movement, but it looks as if just a bit of movement of the camera to the left might have cleared it. The background looks good.

Thanks @David_Schoen and @Dennis_Plank . I didn’t think it was an award-winning photo, but I thought it was pretty decent. I agree about the branch behind the birds head. I made attempts to remove it, unsatisfactorily. I neglected to mention I did remove two branches in the LLC. This afternoon, I shot a hummingbird @ 1600 ISO, @Dennis_Plank. It looks okay, and Topaz handled the NR just fine. I’ll post it later. Thanks, guys.

Very nice! I think it would stand up to a slightly tighter crop. to remove the branch on the left. Then possibly the one through the head might not stand out quite so much. (As is, it is a sort of echo of the other two.)

You’re right @Diane_Miller. I processed another image I took of that same time, minus that third branch. It’s much “cleaner”.

BTW @Dennis_Plank, I posted this to iNaturalist and three different people identified it as a Gray-cheeked Thrush. 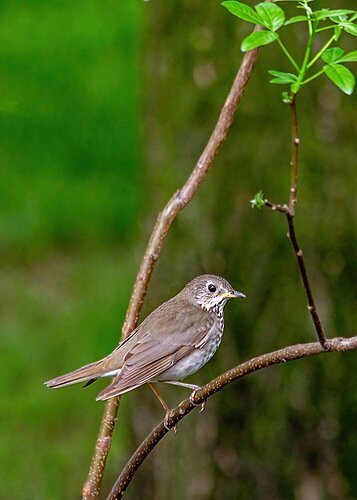 They’re more confident than I would be. None of the field guide images I looked at showed that much white on the cheeks for any of the species.

Same here - on both counts.