The Black Oak: Order from Chaos 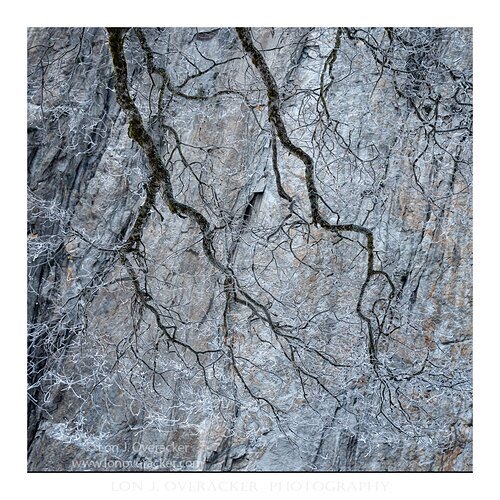 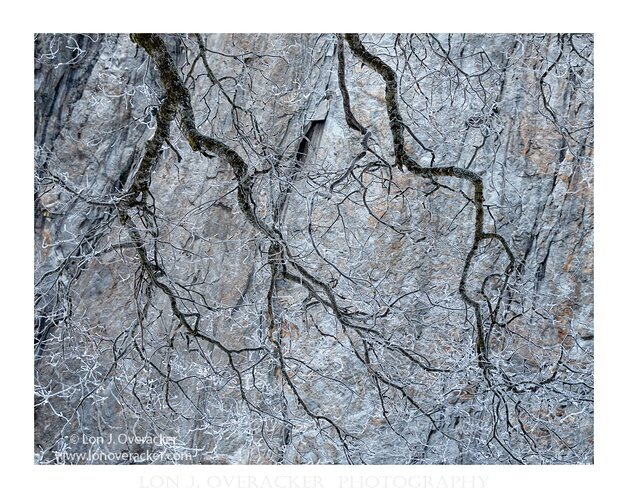 Yeah, more Yosemite, but this was captured earlier in the year in January. Many years ago I learned to see Yosemite in a new way indirectly by one of my favorite photographers Charlie Cramer. Rather than photographing trees or regular subjects, I often seek out backdrops, backgrounds - and then find a subject. And what more obvious backdrop in Yosemite valley than the towering and abundant granite walls. This was found and captured while exploring El Capitan meadow this past winter.

Thanks for looking and any comments, feedback!

I especially interested in the color, WB and contrast.

I’m including the square crop from the original and a further crop getting a little closer. Wondering if the branch details and the frosted small branches show better in the second version?

Lon, a tribute to an image that could have been seen and photographed anywhere including iconic Yosemite and leaving no clue where this is from.
For me it is immediately the second cropped image. Not only for the finer detail but the more horizontal over vertical take too. But, that’s just me on the perspective in the end…

On that point years ago I had an email exchange with a well known NPNer about the number of vertical images gracing walls over the horizontals.
In the end we said it was probably more of a wall space issue than a perspective preference…

Another excellent one from Yosemite, Lon. I never thought in terms of looking for a background first but I guess I do that a lot in my Utah wanderings. Good thought to keep in the forefront of the old brain. For me, the second one. I like the closer detail and I like it better without the bottom “clean” area, which I find to be just the slightest of an eye magnet. Really good work with this one.

Wow, Lon, this is excellent. I am reminded of William Neill’s work there. Not that I am comparing. I think your square crop is wonderful. This should be printed large and framed!

I was all sold on the original square crop until I saw the second one. Harley’s comment about less negative space in the second image makes a lot of sense after it’s brought to your attention. I don’t see a clear winner. They’re both good in their own way.

I like the interplay of the background texture with the ‘texture’ the branches create. Usually one or the other is textured to reduce chaos but this works really well. Perhaps because the branches are so much more dominant. If it was all thin tiny branches it would not have worked as well. There would have been chaos.

Yeah, maybe the square is a bit better in some ways.

Oh, just gorgeous, Lon! The wider version does it for me. It has more energy - the branches feel alive.

I like your cropped version Lon. It lets me better explore the lines and textures.

I’ll chime in as another vote for the horizontal version, both for the points Harley made and also because I prefer that darker gap in the background away from the center of the image. This is a feast for the eyes, Lon, a pleasure to explore the textures and details.

Lon,
… Good to be back around NPN and as always your knocking it out of the park! I hope all is well… been too long.–JG

I know exactly where this is. I recall from years ago you made a similar photo but if I am not mistaken there was a raven on the branch as well. It inspired me to look at trees differently and since then have made many such images. Now to your image. I like the second crop best as it gives the branches just a little more room for the eye to move around them. I also like that you kept the “rusty” tones in El Capitan subdued as it serves the winter feel of this image well.

Great vision. I love the fact that you have taken what to me, on first glance, would have been a too busy background and made a stunning image. Both crops work for me but I have a slight preference for the more square frame.

Lon, Love this image and the philosophy behind it. As someone who takes a lot of tree pics, I will be trying this technique. Personally, I like the square crop better. I think it focuses the eye on the subject better. With the horizontal version, I’m not really sure where to go.

Thank you all for your comments! Sorry, was away for a few days in the mountains and haven’t had a chance to respond.

I think the responses to the two different crops are all valid and I can see the strengths in both. Personally, I can’t decide they both work for me!

Wow, Lon, this is excellent. I am reminded of William Neill’s work there.

Not surprising since he was a huge influencer on my photography.

I recall from years ago you made a similar photo but if I am not mistaken there was a raven on the branch as well. It inspired me to look at trees differently and since then have made many such images.

A keen memory my friend!!! Even more impressive is that this is indeed the same tree as that photo from 2007! Here’s the on you’re referring to and thank you for the comment! I must correct you though - there were TWO Ravens on the branch… 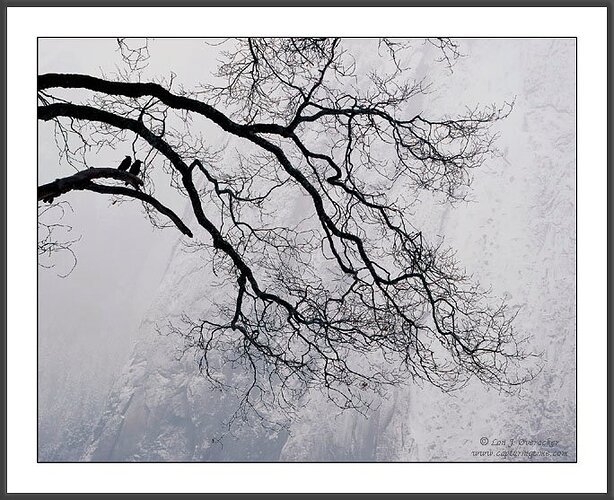 I think this was quite literally one of the only “wildlife” photographs I ever captured with the 4x5!

this is very beautiful. I love the composition and the way the tree branch interact with the background. I prefer the cropped version.

Super late but still want to chime in on this one, Lon. Both crops are great but I prefer the second, closer image showcasing the branches in a slightly larger way. There is also no negative space in the landscape version. All this to say, that if I had not seen the second crop I would have immediately fallen in love with the square crop. They are both excellent images. You are killing it with your Yosemite images lately, Lon! I’m really liking what you’re doing.