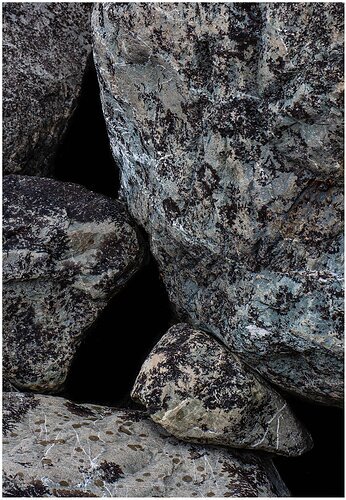 I was traversing an old scree/rockfall that felt quite unstable, although lichen on the rocks suggested that it had been this way for quite some time. Nonetheless it did feel very uncomfortable and foreboding.
After a while I came across a large rock that seemed to be held in place by a small wedge, and it definitely seemed that if the wedge was removed, the entire rockfall would fall a lot further, me with it.

Any feedback is very welcome as I try to improve my image presentations.
In particular, I am interested in the feeling that this image generates.

I like the design, but maybe if we could get a better impression of the size of that boulder, then it would translate the feeling of foreboding better. That said, the contrast of black holes and rock is very striking.

I see what @Mike_Friel is suggesting. I guess the question is whether it’s about the story of the tiny thing supporting a bigger thing or is it about shapes and contrasts. If it’s the former, offsetting the wedge more would help to emphasize that. If it’s the latter, a little crop might be good. I Can see a slighter shorter portrait orientation.

That said it’s a great find well framed as it is.
ML

It’s definitely foreboding. It almost has a lunar quality as well due to the jet black blacks. I wonder if lifting the blacks a bit would change the feel of this image. But then that’s what you were after. One of the rocks has some color. You could boost that and see the effect that has on the overall picture. These are some idea.

For me, Phil, it feels quite precarious and yes, as @Mike_Friel suggested “foreboding.” I like the composition as there is a mystery and curiosity going on. But then, as @Igor_Doncov mentioned, it could be interesting to see what lifting the blacks would do? Different feel for sure. Lots of possibilities. Great capture and nicely seen.

I can’t show a larger view of the large rock as all I have done is cropped a very little from the lower edge, and I opted for the black background to give a stong contrast and add to the sense of unease or discomfort when viewing it. I take Marylynnes’s point, however, and can see that it may be neither one thing (the story) nor the other (shapes and contrast). Must admit, I didn’t think to try and crop in order to present the image as the latter, but having just tried that I prefer the original crop.

I definitely like your suggestion, Igor, of boosting the colour a bit. Again I didn’t think of doing that. It seems to improve the overall image, to me anyway, but it might detract a little from the original feeling associated with it. What do you think? Thanks. 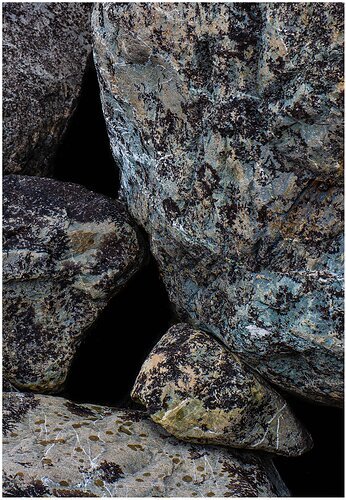 Very precarious. In fact, the two lower rocks along the bottom look like they are cracking under the immense weight and pressure they are under even though we know those are not cracks. I like the boosted color better than the original but I’d also like to see what a B&W would look like. Maybe even more ominous?? More lunar like. More alien like? More Galactic? I really like the sharp angles mixed with the sharp angles and rough textures. Super interesting image, Phil!

Thanks David. Must admit I didn’t think of aliens at the time!