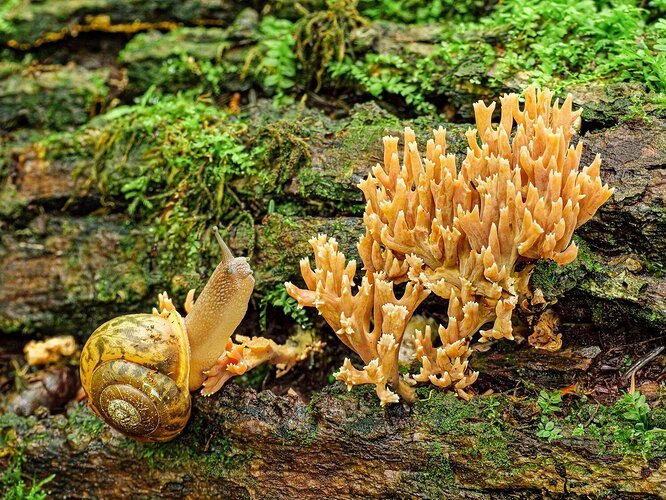 Fungus that is. I swear I didn’t go diving today!

I spent a long time photographing this snail (Neohelix albolabris) on some coral fungus, it hardly moved and by the end I was convinced it was dead. But looking through my photos I see it did move very slightly between images as I did some focus bracketing. Because I changed from this view to a completely different perspective it was hard to detect any shift in position, but slow though they are, the movement is obvious from frame to frame.

This is only the second or third time I’ve photographed one, and those times the critter just kept on eating. This one kept still, like this basically, for the better part of an hour. Some weird yoga pose? Frozen with fright? Cold? Charley horse? I have no idea. It’s crazy, but there was a slug on another bit of the same mushroom that was also so still I thought was dead. According to my books coral funguses aren’t toxic and this is Crown-tipped coral (Artomyces pyxidatus) which is considered edible, but not very tasty.

It wasn’t a perfect stack. Basically one image had the head sharp, one the eye, one the neck and one the shell - I painted in parts of each to form a single image because the stacking software missed the alignment due to the movement. Does it look ok? 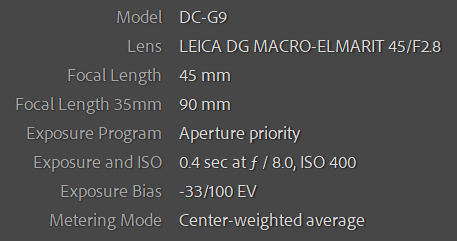 Lr for the initial wb, tonal management with an S-curve, toned down the greens and used some masking to mange the exposure between the snail, the mushroom and the log background.
Zerene for a DMap stack from 5 shots which I retouched a bit
Photoshop for some distraction removal and to further tame the greens when the TIF came back from Zerene. Freehand vignette action in the TK8 panel as well as a Clarity action restricted with a Mid-tones 2 mask. A touch of exposure.

Wow, Kris, such an amazing photo. I’ve never seen a close up of a snail half out of his shell before. So he was feeding on the fungus, huh? It does look like coral. And the rocks and greenery around could be underwater too. What a unique find and capture. Wonderful details in the snail and fungus. Great shot!

Nice! Compositionally, it’s cool that the vertical orientation of the snail matches the vertical fungus. Too bad its other antenna(?) wasn’t extended - or is it just pointing towards us. The focus stack looks good to me.

Yes, it was eating the mushroom, @Shirley_Freeman - I’ve seen slugs do it on corals and other kinds, but not a snail before so this was new to me.

Those are its eyes actually, @Bonnie_Lampley - and one is completely foreshortened because it’s pointing right at the lens. In some shots from the other angle I could see it move from shot to shot as the snail pulled it in. Such strange critters.

I love this, Kris. The little snail looks like he is looking at you and even smiling! Detail is outstanding and the composition, with all of your shifting, worked out perfect. Thanks for sharing your encounter.

Thanks @linda_mellor - I got lucky it was so still. Will process another angle stack soon. Bizarre scene for sure.

What an amazing find, and very well framed and processed. Amazing it was so still. Maybe the mushroom is hallucinogenic for snails and slugs?

The few I’ve tried to shoot were never still and I couldn’t move fast enough for good compositions.

Thanks @Diane_Miller - I really thought it was dead, it was that still. IRL the shell is less than an inch across so the body was really hanging out there. Hope it didn’t actually die in the end, but retracted and went on to feast some more. Maybe the fungus has some property that makes them drunk.

Kris, the colors and upright pose of the snail look great. I expect that any minute (or may that’s day) it will bow down to the coral. Fixing small movements in the stacking software is quite common and your results looks fine here.

Thanks @Mark_Seaver - it was such an unexpected scene. I wonder if it’s still stuck like that? Crazy.

Thanks for the E.P. Miss Shirley!

So I went to Fungi Fest up at Kemp Station and showed these photos to a few of the fungi experts who were there to speak and help with the ID from our foray. None had seen this before nor had any explanation as to why the snail would be frozen as a result of eating the coral fungus. So it’s still a mystery which is cool, but I was kinda hoping I’d get an answer.