For those who have visited the San Juans Mtns of Colorado will recognize this scene near Telluride. You may also recognize Wilson Peak from the Coors lite beer can! During processing this image, I paid special attention to color grading to have the clouds and aspen hues somewhat close.
Cheers,
Ken 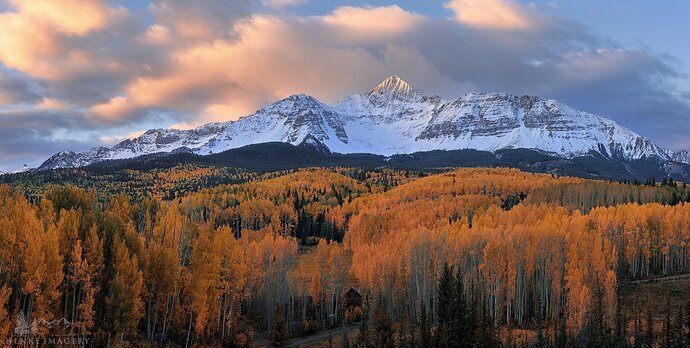 Ken, it’s nice to see you posting some images over in critique. What an impressive scene, you have some wonderful light and clouds here. And I do like how you warmed up the highlights in the clouds to have a hue similar to the aspens, it’s a nice touch. Your processing looks great, with just the right amount of shadow detail in the foreground. I also like the luminosity you used on the snow covered mountain, it creates a nice transition zone from aspens to sky.

In terms of composition, I think it is important to leave the base of the aspens visible on the right, I like how you have handled that. This introduces the house into the image. At first the house bothered me, because it breaks up the wilderness feeling. But it would be hard to clone away, so in the end I am okay with having the house in the scene, especially given how small it is.

Thanks Ed for your thoughtful response. Yea, initially I did want to clone out the “cabin-mansion”, but after some thought realized it is part of that scene that many are familiar with.

That’s a doozy of a beauty Ken. The kiss of light, especially on the peak, and the dusting of snow really add to the majesty of the color below.

I could see a slight bump in contrast at the brighter end of the curve in the aspen to let them glow even a little more. However, it might rob more from the dominance of the mountain than you want. Oh the fun that processing choices brings!

Thanks John for the comments. Yea, with these early morning images in the mountains, it’s always a judgement call how light to go with the foreground to make it realistic. That said, it would be relatively easy to make those aspens really pop. But you nailed what I was trying to accomplish with this image; allowing the peak to capture one’s immediate attention.

Simply gorgeous. What a grand scene - beautiful conditions, great sky and that last tick of light on the peak just tops this one off - quite literally.

I have no nits or suggestions. Love this as presented - even including the “cabin-mansion…” If anything, maybe even brighten the cabin up slightly? Might as well embrace it’s presence. As you mention it’s part of the scene that thousands have seen and included before…

Even if the wonderful light on the peak did not exist, this would be beautiful, but that light takes it over the top. The house and road? Integral parts of the scene. Wouldn’t change anything.

Thanks Lon for your comments!

Thanks in particular for the comments on the road and house, Jim. They indeed are part of the scene and I appreciate you, and the others that commented, understand that as well. Oh, do I wish I owned that “cabin-mansion” !

Wonderful capture. I wish I were there to see that magnificent display.