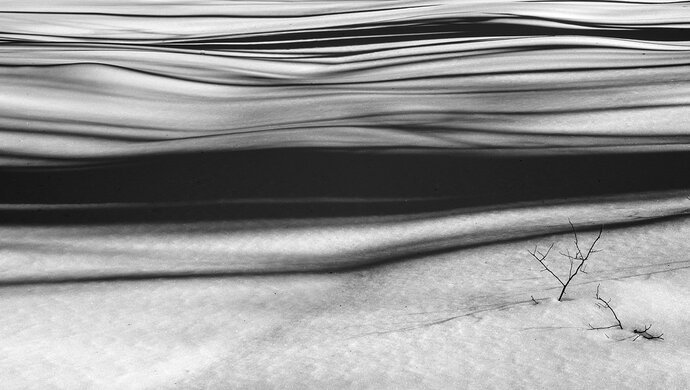 Went back to an area, with my camera, which i previously only had my iPhone for making a photo. I wanted to isolate an element against the undulating snow pack. Not sure if this works or not.

I prefer this to the previous one mainly because it’s more original. I can’t see the enlarged version so I can’t give good suggestions. The black band seems to be a bit overwhelming in it’s darkness but am not certain. The black twig is an important element but it doesn’t stand out enough. I would darken it and raise the shadows just a trifle.

I believe NPN must roll out software changes on Sunday because things are often flaky on that day.

I like the suggestions @Igor_Doncov . I darkened the twigs and their shadows, brushed a bit of white around them to increase the effect since there was not much left to darken., Also increases white in small strip in major dark area in center. 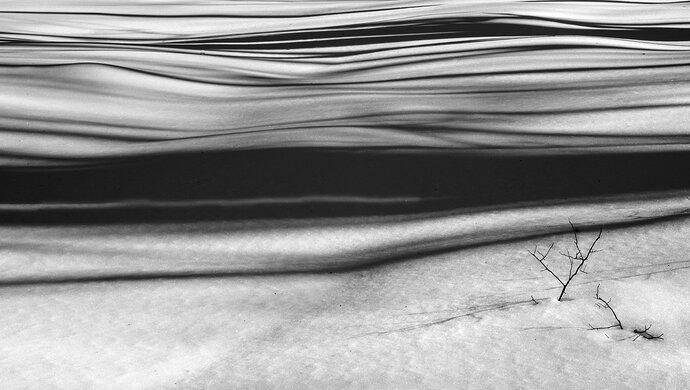 Mario, the rework based on @Igor_Doncov suggestion are a good improvement. You really needed that twig to be more prominent to carry the image, and this rework does the trick for me. I also like how brightening that white band above the twig makes it stand out more too. I see these shadows in the snow all the time, and never stop to shoot them. You have inspired me to to give it a try after the next fresh snowstorm.

Mario - The reworked image looks wonderful. I like its abstract qualities and tonal range.