You only have to ask 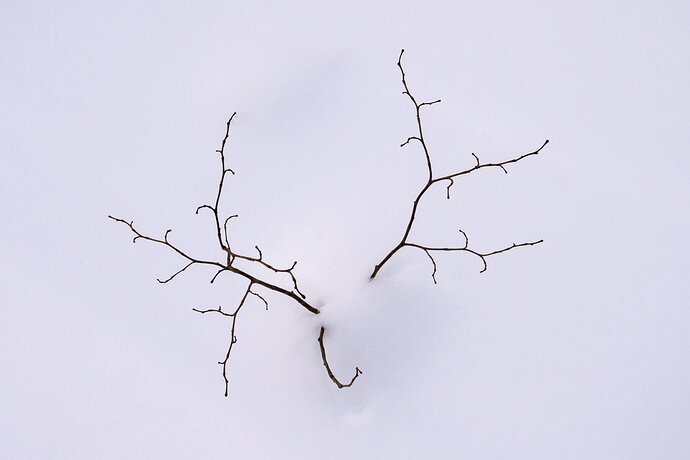 more Bare Essentials in the snowy woods. The sun was just barely coming through the clouds and so added a slight shadow and shine to the smooth snow. I basically just stood over this tiny tree and shot. I liked the way the branches spread and curled away from each other. No idea what it is.

Does the center placement work here? It isn’t a symmetrical image per se, but it feels balanced.

Is this a composite: No
handheld 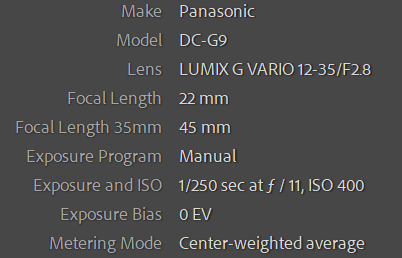 Lr for a bit of an exposure bump, decreased blacks & highlights, increased whites. Tiny bit of texture & sharpening. A tiny bit of warmth in the highlights with the color grading panel. Photoshop to remove debris on the snow.

Simple with a very graphic look. This one works quite well for me.

Lovely subtle shading and color on the snow, with a very pleasing subject. It feels very well balanced to me and I like the horizontal composition. There is enough “movement” in the branches that the centering doesn’t feel static.

I love this. It stopped me in my tracks. I like the center placement because the white doesn’t overtake the scene and look like empty space. Beautifully done!!

Glad it works, I was afraid it was too static as Diane helpfully points out it isn’t. Tough to judge sometimes because I was there and the scene felt electric to me, but that’s so subjective. I also was worried the snow wasn’t white enough, but snow never really is, but instead reflects ambient light which mostly is sky reflection, so it depends on what’s going on up there.

Does the center placement work here? It isn’t a symmetrical image per se, but it feels balanced.

I think your placement works really well. The spacing from the top and bottom edges is similar, which I think helps, but then having different spacing on the left and right keeps the composition from being too static.

The delicate simplicity of this image is just wonderful, great eye to spot this Kris.

I like this image very much as presented, but as with many graphic abstracts, I think it also works pretty well with a horizontal flip.

Thanks @Ed_McGuirk for popping in on this one. Glad I’m not the only one that likes these odd little scenes. So many photographers stay in for the winter, but look at what they miss out on.

So many photographers stay in for the winter, but look at what they miss out on.

This is the kind of simple winter scene that I love. Actually I’m jealous, where I live in eastern Massachusetts we have had no snow at all this season, it’s very late to have gone this long with no snow. We are supposed to get 6 inches tomorrow, so I will have my first crack at it later this week hopefully.

Yeah, my husband is in NH right now and said it was all freezing rain. Bleah. We just got another 8 or so inches yesterday so when it gets out of the single digits I’ll hit some trails. Plan to work a few rivers as well since I love winter waterways. Marinette county has a ton that I hope are accessible (meaning the roads are plowed).

Kris: This whole series has been terrific and I really like this one. Thoughtfully composed and superbly captured and presented. >=))>

Thanks @Bill_Fach - it’s so fun to do and I have more so … careful what you wish for. lol

Simplicity, a hint of symmetry. A balanced spread of lines. Bare branches popping out of the snow: survival. I like this kind of small scenes.

Thanks @Igor_Hoveijn - I was on a roll with these that day!