I photographed this Chestnut-crowned Antpitta on our Ecuador trip last year. It was singing and at the same time had an insect it had caught in it’s beak, perhaps hoping to present it to a potential mate.

I am posting a second image of the same bird, I am curious which of the 2 you prefer and why. 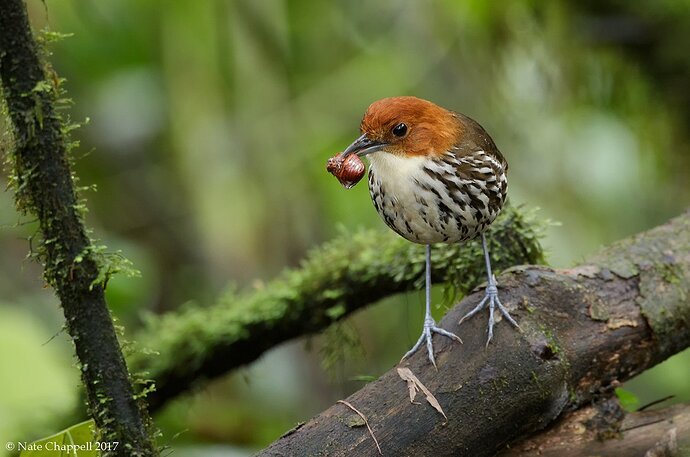 Thanks for sharing, Nate. I tend to prefer the horizontal here for its simplicity, and the IQ looks good with the TC.

Hi Nate: On balance, I prefer the first of the two images. I like the upward energy of the pose more and the pose seems to keep the same flow as the background. It would be nice if the branch crossing the upper right corner weren’t there as it blocks the flow. In the second image I really like the better look at the prey, but the almost vertical in-focus branch puts a hard stop in front of the bird.

Both of them are fine images.

Hi Nate
I vote for the second posting, I like the way the branch brings your eye out to the Chestnut-crowned Antpitta.
Peter

My vote is for the first image because it is a little cleaner with respect to distractions. I find the leaning stick on the left side of the second image to draw my attention. With the first image a very light vignette might focus more on the bird. BTW, great job with narrow DOF and slow shutter speed in difficult light. Would a fill flash have frightened the subject?

I like the vertical frame better, mainly since it gives a better view of the entire antpitta. The second image also has too busy a background to highlight the bird. I however think moving the subject slightly to the right would make the first image more balanced.

Thanks David, we aren’t allowed to use fill flash in that particular reserve, otherwise I would have.