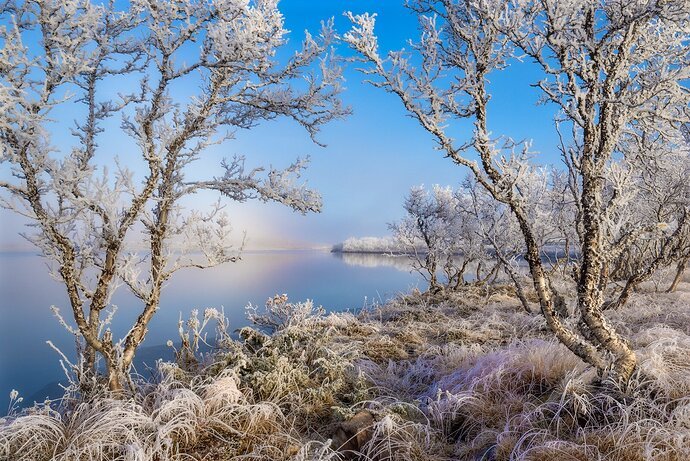 Jorma, this is an outstanding view of a heavily frosted world. I am interested by the magenta patch in the grass. Is that a flare artifact?

What a nice image of frosted trees. I love when our trees get frosted here in the NE. It’s like being in a fairy land. I also like the tall frosted grass. It adds a lot of interest to the image. I think that magenta patch of grass is a bit distracting though. I’m not sure I know where it’s coming from. I like the glow that’s coming in over the water, but I think it feels slightly over bright. I would just bring that down a little and darken those branches of the tree where the glow shines through them to match the darkness of the branches around them. Nicely seen, Jorma.

Thanks Donna and Mark. I had to check the original and there is a pink area like that. I didn’t want to take it off because it arouses discussions. This picture also looks a bit too light, but that’s probably due to the transfer of the picture.

That’s gorgeous. I love your alternative to snow. The texture of the frost and calm colors are really nice. I did notice the pink spot as well.

We have hardly had any snow here until this challenge - now it has snowed twice.

I think your snowless winter has been much nicer looking than our brown/green grass, however.

The frost really makes this image. I like the overall lightness–to me it helps emphasize the cool/white colors.