Electrified! Warning-This is not a pleasant image

A series of images has been setting in my files for nearly three years. There is a fence here that had a hot wire attached and it must have been hooked directly to line current. It had killed a Great Horned Owl several years before when there was stock on the property to keep in, but it was reenergized for unknown reasons about three years ago. It killed the owner’s cat, but he still left it on. When I noticed a bird dangling from it, I walked along it and collected at least 15 that had been killed. I’ve been ambivalent about posting this because it’s hardly a pleasant image, but it’s one of the most powerful image I’ve ever taken. In this case, it looks as if the Male Goldfinch was perched on the hotwire and started to feed the juvenile perched on the fence. Their beaks are literally welded together.

@David_Kingham. If this is too graphic, let me know and I’ll remove it. 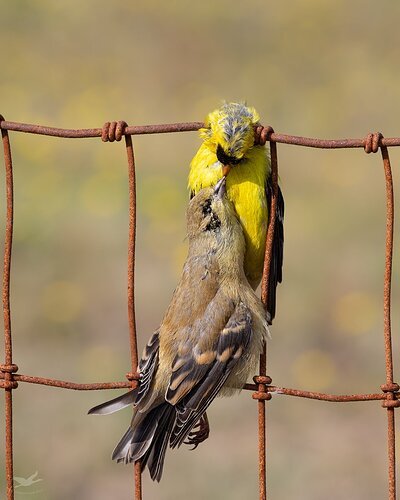 That’s a tough one Dennis, though technically superb in illustrating such a dire circumstance. It reminds me of other images of wildlife (deer, elk and antelope, e.g.) hung in stranded fencing. Those serve their purpose, as does this.

@Dennis_Plank. Have you, or anyone contacted the owner about this? If that is line current, any person who touches it would likely not survive. Aside from the legality of this, the owner needs to rectify the situation before more animals, or a person are injured, or killed. Just my $.02.
–P

Dennis, this is a real heart breaker. Thankfully you did not come in contact with the gerry-rigged booby-trap.
I’m totally with Preston on this one for sure. No one should be running direct line current openly for ANY purpose. I’d go so far as saying it is totally illegal most anywhere in the USA. The alternative to calling Code Enforcement or the Police is to ground the line in hopes it burns the fools circuitry up…Scary !

…Code Enforcement or the Police…

I’m betting there could be liability issues as well as legal issues. We use standard electric fencing for our temporary stock fences in the Rockies, but hang warning tags for the uninitiated few who don’t recognize it when they see it. The scary thing to me is that I’d have zero clue that the fencing in your photo was “hot,” whatever the current source.

whatever the current source.

@Hank_Pennington
Hank, good point and you’re correct. Electrified fencing is one thing to “sting” subjects away from the fence. And yes, any fence should be clearly marked according to safety codes for that purpose. But any fencing receiving enough current to kill and injure must be out of legal bounds I would think. If not subject to law suits if death or injury occurred.

Yes, Preston, I contacted him immediately. While his initial reaction was pretty negative, he’s mellowed a bit and I believe that despite his reaction he deenergized it pretty soon thereafter. We haven’t found any dead birds since then.

Yes it is a disturbing image, but photos like this enables change to occur. The amperage running through that fence made it quite dangerous and am glad to hear that reason prevailed. Well done…Jim