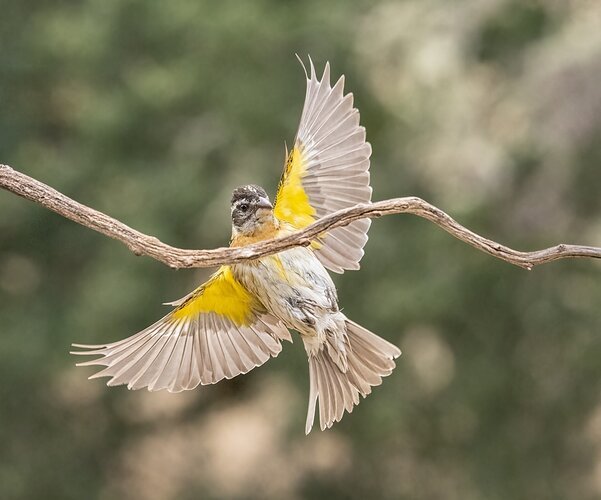 A few mornings ago, after the light got too harsh for nice portraits, I decided to utilize the brighter light to go to fast shutter speeds and try for the ridiculously low odds of getting a decent wing flare on a landing. I haven’t had any luck with AF keeping up so I set manual focus a couple of inches behind the branch (by ESP) and as a bird approached I just held down the shutter button, set to electronic shutter at 20 fps. I zoomed back to cover a reasonable amount of the perch, and the subsequent crop would give me a tiny bit more DOF. Out of maybe 15 approaches, this was the second best. Murphy intervened to make the best one a Starling. (Apparently an Oriole was asking too much.) The biggest issue was that 20 fps is not nearly enough. Almost all of the shots had very awkward and asymmetrical wing positions, and of course most were seriously OOF.

I do not do bird photography, but to me this is a really great bird-in-flight image. An amazing pose and I also like the branch composition-wise.

Thanks, @Diane_Miller for sharing your thought process on getting this shot. It is mind boggling to me the amount of forethought that has gone into this type of image. Great capture, IMHO.

Hi Diane
What did you use as a target for the focus point, anyway it worked. It is encouraging to see 20 frames per-second and no rolling shutter affects. You shot is nicely framed with a soft back-ground an great color and detail.
Peter

This is very cool, Diane. My only suggestion would be when you start the session to shoot the perch in focus so you can merge the two images later. You did catch an awesome wing flare.

Thanks @Ola_Jovall, @David_Schoen, @linda_mellor, @peter and @Dennis_Plank. Dennis, the only think I don’t like about that idea is that I didn’t think of it myself! Peter, I focused manually on part of the perch support that looked like it was about 2-3" behind this branch. David, I did bring the Highlight slider down quite a bit, but it could use a bit more.

I wish they didn’t usually approach the perch from below.