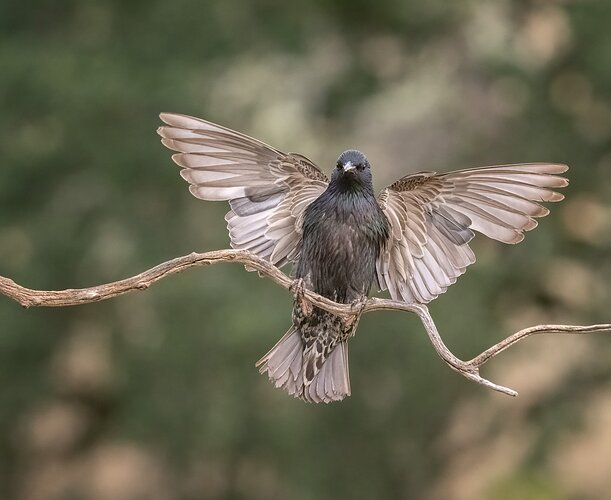 And with the darks on just the the bird made darker. They are “dark iridescent” but not really flat black, so hard to get right. 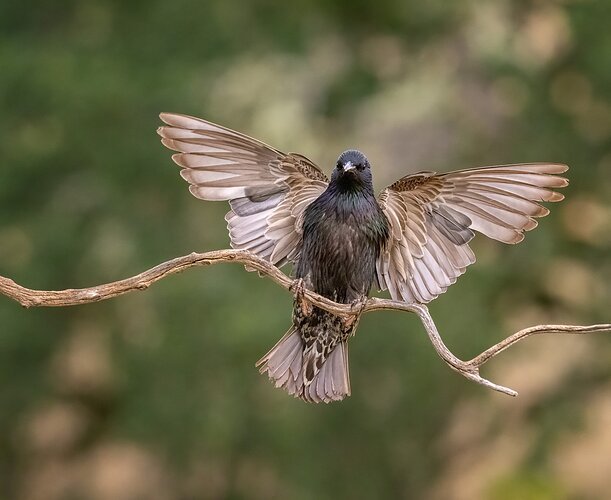 I was attempting (by luck) to get a good wing position as birds approached a perch near the feeders. Manual focus set to a little behind the branch, electronic shutter set to 20 fps. Hit the remote when something approaches. Delete a lot. I posted a Black-headed Grosbeak a couple of days ago, which was the second best, with the branch in front of the body. This one was the best. A Starling. Sigh…

Canon R5, 100-500 + 1.4X at 270mm, f/8, 1/4000 sec, ISO 12,800. I probably could have dropped the ISO by a stop, but there was some variability in the light with some thin clouds. This one cleaned up nicely in Topaz Denoise. Very little done in LR, only denoise in PS. A hefty crop to 40% of the original frame. I was shooting wider than normal as I couldn’t predict where they would land until it was too late.

You are definitely on a roll, Diane. This is an awesome shot. The composition, bird position and the beautiful, perfectly lit, background are outstanding. But what I keep going back to is the amazing detail/focus on the bird. . . .and how perfectly the wings are spread out.

Very good, Diane. The wing flare is excellent in this one. It looks like the focus was right on. One trick that I’ve read of (I think from Alan Murphy) is the same idea they use in hummingbird multi-flash setups: Use a short focal length stopped down a fair amount and locate your camera nearer to the perch, then just set back in your easy chair with a remote trigger and your coffee.

Starling or not, at least you got something that works so well to show feather and wing structure - that notch in the primaries is pretty universal I think. I saw it in the hummingbird I’ve been shooting lately. The detail is pretty good even at that ISO, but I wonder if you could bring down the darks on the bird a bit more? The starlings I’ve seen have quite dark plumage in spots, but maybe yours are lighter. Just a thought. Super job with the set up, the execution and the processing!

Thanks everyone! @Dennis_Plank, great idea – I could try that! Alan gets some incredible images with very clever setups.

@Kris_Smith, I plead guilty to trying to pull up too much shadow detail. I’ve put a RP next to the original with the darks made darker, just on the bird. Doing it to the whole image looked too heavy.

I’ve put a RP next to the original with the darks made darker, just on the bird.

That does the trick! Terrific mask job and the bird looks more natural and has more presence.

I like the repost. I was so focused on the wings in the original that I didn’t pay much attention to the rest, but it was awfully light for a Starling. The repost is much more natural and pops better.

Diane, the repost is better IMO. Great detail, Interesting perch that matches the open wing coloration, and a complimentary background. I like the direct eye contact, the wing position and both the tail and wings flared out. I love the triangular polka dot inner section of the tail too. You might want to rotate the bird and the perch CCW so that the bird isn’t angled. The bird will be flat but the perch will be rising up slightly left to right instead of down slightly left to right.