It was pretty amazing, yesterday with a very heavy storm passed over and then the sun came through brightly. The result was this complete double rainbow. This is a two shot pano, hand held, since I wasn’t sure the light would hold long enough to set up and level my tripod. (R5, 24-105 @ 24, 1/125 s, f/14, iso 200, polarizer) 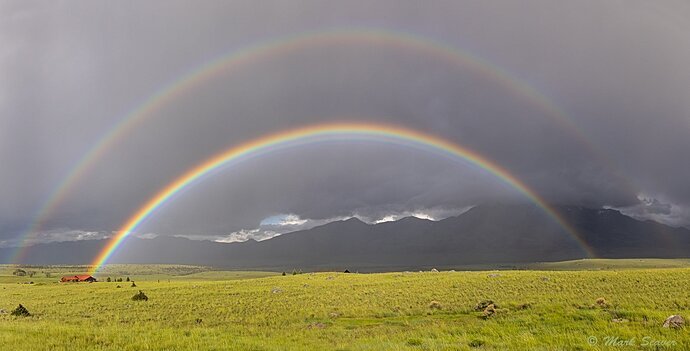 It’s great when you can catch this. Nicely done, Mark.

To see a double is extra nice, but to capture this beautiful image of a double in the wide-open west, that is really extra great, Mark! This really looks like it belongs on a wall.

This sure is a beautiful scene, and I can almost smell the rain in the air just by looking at it. I also know how quickly these moments can fade, so it’s quite impressive you were able to capture it, and especially with a two shot panorama. The scene is presented very naturally which is fantastic, and I like how the wide aspect ratio matches the subject so well, not to mention the placement of the building on the left. My only suggestion would be to every so slightly reduce the brightness of the foreground. Those wonderful bright vivid greens are competing with the rainbow, but when they are every so slightly tamed a bit, my eye is drawn more to the rainbow and the image feels even more peaceful.

What a great moment you got to witness, Mark! Being able to capture double bows in their entirety, is being Johnny on the spot. These come and go so quickly and for you to be able to line this up with the house is special. The foreground could certainly be slightly less bright and maybe even a tad desaturated so it doesn’t pull the eye quite so much. I like that you have a clean sky canvas for the bows to really pop against and that the background hills are in shadow. Well done Mark.

Fantastic!! FG, mountains, sky – it’s all there to set off the rainbow – stunning!

Were you able to position yourself so the rainbow landed on that house? If so, quite a few extra points! If it was luck, still a winner! And extra points for having the foresight to grab a polarizer!

Wow! This scene is really nice. I love when nature unfolds in front of us to reveal something magical. There’s just something about rainbows, ya know? Really strong idea to grab the polarizer to make the rainbow pop. The rainbow is clearly the main subject here. I would maybe suggest darkening the greens in the foreground and then adding a very slight vignette to the edges to bring even more attention to the rainbow. Well done!

…It was pretty amazing, yesterday with a very heavy storm passed over and then the sun came through brightly. The result was this complete double rainbow. This is a two shot pano, hand held, since I wasn’t sure the light would hold long enough to set up and level my tripod. (R5, 24-105 @ 24, 1/125 s, f/14, iso 200, polarizer)

What an awesome moment captured here Mark! I like how the rainbow touches the house and fills the frame. Wonderful image full of delight.

Oh my! What a wonderful moment in time - in and of nature.

Not too often to witness one of these beauties. And to make this even more special, I love the “pot of gold” at the end of the rainbow by having it end at the ranch house. Oh, and I’m pretty darn jealous… but maybe the winters are tough…