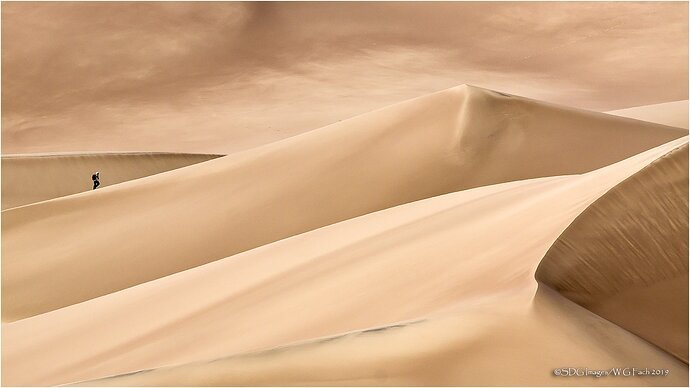 Going-It-Alone3791A77XXL1600×900 906 KB
_
I attended a medical conference in Denver in November 2014 and was able to spend a couple of days at GSDNP. I practically had the place to myself, especially early in the morning. I spotted this lone hiker starting his trek to the top and was able to track him for quite a while. All comments welcome. >=))>

Ah, the isolation, I like it, Bill. Especially how the color of the dunes and sky are similar, almost as if the dunes extend into the far background. The lone hiker’s isolation on the dune ridge and the far dune as a backdrop is excellent placement. Very pleasing to view, well done.

This is excellent, Bill. The hiker adds great scale and perspective. Framing works well and processing looks good. I would try maybe to add a little vignette but other than that no other suggestions.

Bill, I’m also a fan of GSD having been there a few times. I’ve found getting color balance right is tricky depending on sky/sun conditions and time of day, but this looks about right. This is great for showing the immense scale of these dunes. The tiny hiker is quite sharp, and your angle of light does a good job of emphasizing the gentle architecture of the dunes. Like @Reno_DiTullio I was intrigued by the upper part, but just can’t get my head wrapped around it as being sky. Although it has the texture of sky, the color is the same family as dunes. Maybe a much larger dune in the BG? I must admit I’m baffled

Bill: The BG is indeed a large dune. I’m puzzled that some thought it was sky.

Sky? Fooled me. I’ve seen sky this color early in the morning as a backdrop for the dunes in DV.

This is gorgeous, Bill. I am enjoying the earth tones of the dunes and the solitary hiker gives a sense of scale to the scene. This is being super picky and just a personal preference, but have you thought about cloning out the tracks leading toward the URC? I did not notice it in the smaller version, but noticed it right away when opening the larger one. either way; great job with this.

Bill, a beautiful sense of scale with the lone hiker. Really a nice composition and for me the colors look very well done!

Wow, this is excellent Bill. I like Ed’s thought about those tracks, but that’s the only nit I can find; this one works very well for me!

But for the inclusion of the person, this would seem almost abstract in light and color. That lone form helps carry this one right over the top.

Bill, the gold tones throughout are terrific and the shapes of the dunes look great. The lone hiker is a dramatic surprise that adds a lot. Fascinating that the background is a large dune. I too thought it was sky, there’s even a “contrail” near the upper right corner (yeah, it is a dotted contrail…

Thanks to all of you who noticed the tracks. There were some others that I did get rid of but I missed the ones noted. Here’s the image with the extra clean-up. >=))> 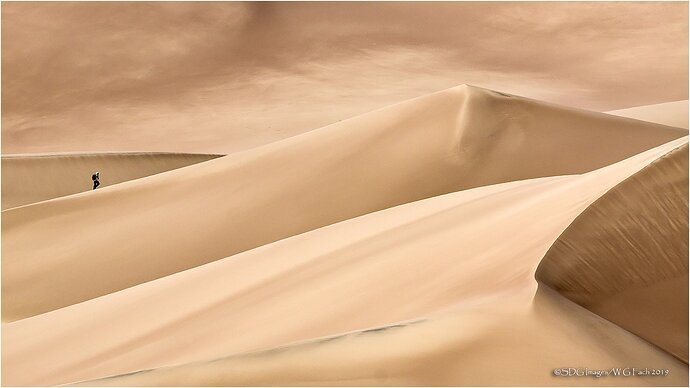 Bill, this is fantastic!

I love the comp, the light, the texture and the scale represented!

I found myself naturally moving through the scene over and over as studied all it’s wonders!

No nits after your clean-up. A really stellar image all around. I like the even, low-contrast light here. That’s hard to wrangle, but you did a great job.

The background does have the texture of high clouds rather than sand. At first glance, I thought this was a sepia conversion, but then the colors in the hiker set me straight. The colors in the small hiker and the sharpness of the focus on him reminds me of the adage of getting the “eye” of the subject sharp.

Great flow and movement!! Excellent handling of the light.

Clarity, sharpness, light, everything is just killer here. I was confused with the background being sky too. Knowing now that it is a HUGE dune makes this even better!

Outstanding image Bill!! Love the tonality throughout and yes, I did get the impression of sky for sure and would have continued thinking that until it was mentioned. The tracks in the UR were a give a way though. Great job on the rework.

Sometimes the presence of man is ok…

Bill, I can’t imagine anything making this image (now without the URC tracks) better. The comp, light/shadows, colors/tones, textures, the hiker for scale, etc… So simple but so much that keeps me looking over and over. One of the best I’ve seen in a very long time. Congrats!

This is a beautiful image on two fronts. One side showcases the beauty and wonder of nature via the clean lines and soft hues and tones. The other side has to do with the inclusion of the person. It speaks of adventure and exploration. I love how the two aspects have been brought together so nicely here.