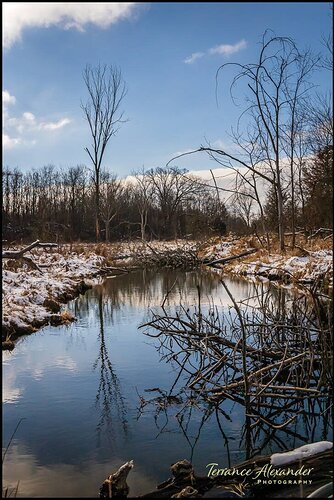 It was a beautiful crisp January day for a hike and travel restrictions were taking a toll, so I headed to one of my favorite local sites - Watkins Lake State Park. I decided to take a trail I had never traveled before, mainly because in the summer the Michigan mosquitos will drain you dry! The weather conditions when I started out were cloudy and windy so I did not anticipate anything special and left my tripod in the car. I stumbled upon this small water course in the middle of the park. The blue sky shimmering on the water drew me to the image. It was still pretty windy in the tree tops but calm near the surface. I wanted to really freeze movement to give the scene a calm feeling.

Any comments are welcome - thanks.

Is this a composite: No
After experimenting with a number of settings handheld trying to capture no movement in the trees, I settled on this one. The image was taken with a Canon EOS R and RF24-105mm F4 L IS USM lens: 40mm, 1/1000 sec at f/9.0, ISO 2500. Processed in LR Classic.

Terrance, I really appreciate your taking the time to share your intention for taking this picture. I hope, therefore, that you will take my critique as one man’s opinion and nothing more. In my view, you haven’t been selective enough in framing the photograph. For me, this image doesn’t succeed in imparting the sense of calm that you were striving for. In fact, again for me, it feels chaotic. In the lower part of the frame there are all the broken branches , rocks and reflections that break up any sense of flow from the front of the frame down towards the horizon and draws my attention away from the calmness of the pool. Then too, almost half the image is of the sky, which I don’t think adds much, and indeed, detracts from that sense of calm, containment that you were going for. In my opinion, if you scroll and crop out about two thirds of the sky, it is already a stronger image - again, more contained and therefore closer to your intention. To me, Terrance, this feels like what my mentor, David duChemin, would call a sketch image - a very early draft as you work your way towards clarifying (for yourself) what this image is really about. This looks like an amazing spot where I would imagine myself taking, maybe 30 or 40 shots as I try and work my way towards getting the image in synch with what I’m feeling and trying to share. Anyway, just some thoughts from a very enthusiastic amateur.

Kerry - I appreciate your comments and agree with the framing. I’ll play around with that some more with various crops. I did take a whole series of shots at the site that day, but unfortunately without better waterproof boots I was in the best location I could get to without wading through swampy areas. If I could have moved further left I probably could have eliminated a lot of the lower right branching, but my location was pretty constrained. A lot of my shots dealt with various camera settings to remove motion from the trees. I do plan to return to the spot again with better equipment for getting around the water, and hopefully will find nice conditions for a shot.

My initial thought was that “Darn, those cluttered branches rob from that calm feeling.” Then I read @Kerry_Gordon’s critique and realized I am a child playing with adults…