Another hand held shot using my Canon 100 mm f 2.8 macro lens. Taken on a foggy day in the Dahlia Garden in Golden Gate Park, San Francisco. Using a tripod to get flowers close to the ground is way too hard on my old guy neck, so I developed a style of hand holding, shooting at 2.8 to blur the background, and shooting off five or six auto focus shots and hoping one gets the correct focus. In post processing I paint away any hot spots in the background using Soft Light at reduced opacity. Any comments or suggestions are welcome. 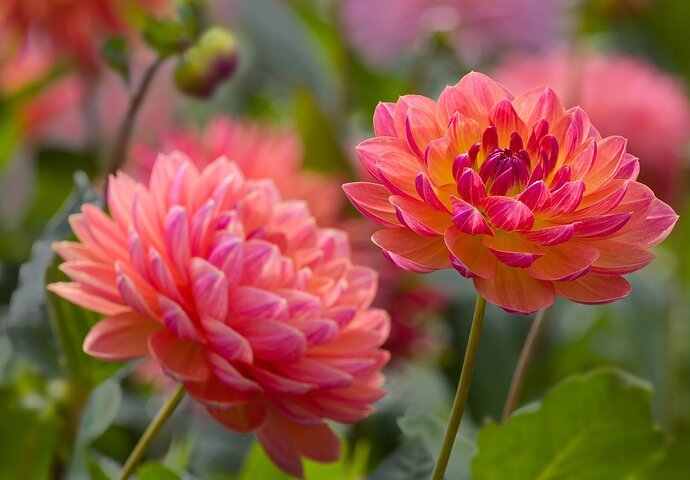 Stunning colors here! Wow, this is beautiful. Looking at the large version, you could post a large crop just of the main flower; amazing details you achieved here.

Your selective focus and wide open aperture has rendered the left flower soft enough and the main flower more than sharp enough to draw a clear distinction between the two. But I’m wondering if anyone thinks they are still competing with each other? Just thinking out loud. And regardless, this is a wonderful image, beautiful colors and just terrific processing here.

Tony: An intriguing image with really nice color palette. Conventional comp would be to have the OOF flower in the BG instead of the FG but this is growing on me. The focus and detail on the main flower is exceptional. Nicely done. >=))>

Having the sharp dahlia behind the oof one throws me off a bit. Would prefer the reverse or both in focus. Could both have been in focus if taken from a different angle? Beautiful dahlia specimen and background colors.

Thanks for the comments all. Patricia, your comment made me take a look at the photo more closely. It’s interesting, my brain thinks the dahlia in focus is in front of the out of focus one. Of course, I can’t remember for sure which was closer to the lens. I suppose that because the out of focus one is larger, then its the “in front flower”, but that assumes the flowers are the same size. It makes me also realize how much we depend on light and shadow for depth perception. It’s an interesting “how do our eyes and brain perceive things” question. Ultimately, of course, it doesn’t matter which one was in reality in front and which behind. If our brain sees it one way, and that doesn’t seem right or pleasing, that’s the way it is!

Tony: On further scrutiny I do think the OOF flower is behind the plane of focus but the OOF one is bigger creating the illusion of it being in front. Like you say, our visual systems use cues and clues to help us figure where we are in space and a two dimensional image can certainly fool our preconceived impressions. >=))>