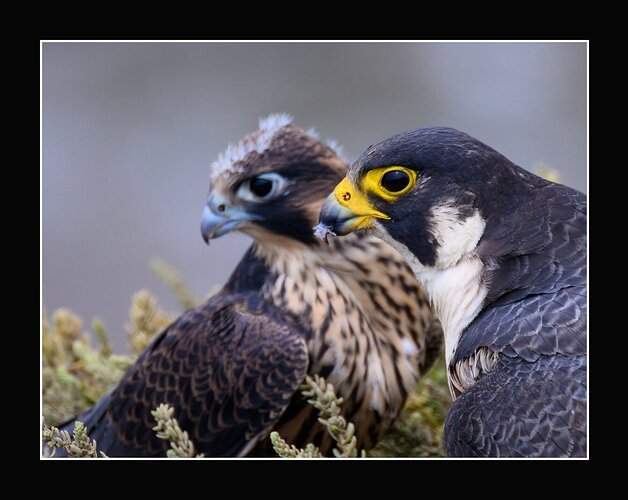 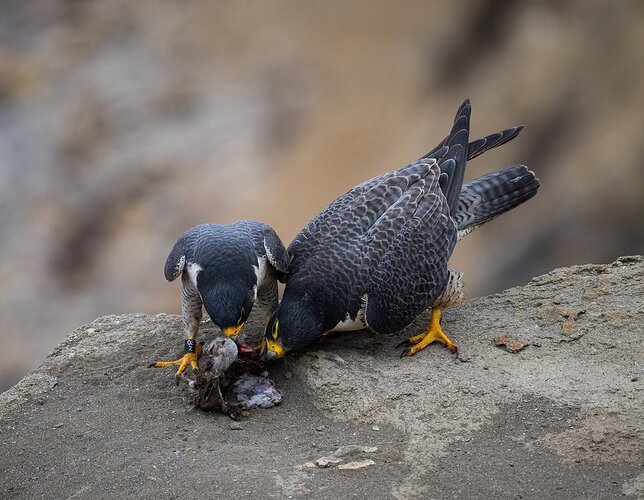 This is the same group of peregrines as my last shot. In fact, I believe this was taken the same day as my last shot. This was 2 weeks ago today and the juvis are are acrobatic flying machines now. They were actually doing in air food exchanges 2 days after their first flights which I find pretty incredible. They are very spread out now so it’s extremely difficult to get images unless you get lucky with one of them coming near to where you are set up for them. It’s a fun 2 weeks but it ends as quickly as it starts. I think I took over 15,000 images of these guys and I mostly blame the speed of the new camera bodies. That’s my story and I’m sticking to it. Anyway, I’ll have more to come but I wanted to share what I thought was a unique side by side image of the female adult and a male juvi. In fact, all 3 of the juvis were males, which I was told by a biologist, is why they are flying and doing aerial exchanges so quickly. The females are much larger and tend to stay close to the nesting site for a few days longer to bulk up. Anyway, I like this view of the two birds with exactly the same head angle but posed in different directions so you can really see the difference in how the young birds look compared to the adults.

I shot this wide open to put emphasis on just one of the birds while rendering the other bird out of focus but still providing enough information as to what is happening. Does the out of focus juvi bother you? Like I said, I like it but it may not be for everyone.
Also, I apologize to those of you who don’t like the frame. It’s an old habit. Let me know if you would like to see this without the frame.

David, this is a beautiful image. It’s so artistically presented. I could see this on the cover of National Geographic! My first impression didn’t even think that the little one was out of focus, I was mostly seeing the wonderful poses and expressions and details in the adult and the soft, fuzziness of the feathers on the not quite grown up falcon. This is really a stunning image.

I had no idea there was a size difference between the genders with these guys. Thanks for that! And any shot of peregrines that shows this level of detail is welcome. If you had a shot with the focus on junior you could try to stack them, but this looks ok. We know it’s an adult with a young one and so our imaginations can fill in some detail. What a privilege to spend time with this family.

15,000 shots! Wow. But I know a little of what you mean. When I use pre-capture with my G9 and forget to use it sparingly, I have a slew of shots that are 99% the same and just taking up space. Same goes for any of the high speed burst sessions. Technology is wonderful, but oh…the weeding!!

@Kris_Smith, @Vanessa_Hill
Thanks for stopping by to take a look. I added a second image to show the size comparison between an adult male and adult female Peregrine. It’s substantial. This particular male is banded. He is a very proficient hunter bringing in plenty of food for the three juvis and the female. Here, he has brought in some leftovers to give to the female.
When shooting fast moving birds, I have the frame at it’s highest, 20 frames per second with the Z9 and even faster for the Sony A1 and canon mirrorless. the 15,000 shots is over a 6 day period but I had over 8000 shots on a particularly great day where the birds were really flying a lot. Culling is a nightmare for sure.
Kris, I never took a sharp image of the juvi as this is the way I intended the shot to look so I can’t combine 2 images to get both birds sharp. It really is a privilege to spend time close up with these birds. On any given day there are no less than 60 photographers shooting these birds and they have become almost oblivious to people. One of the juvis hopped up the hill to within about 4 feet of a photographer. Pretty crazy.
Vanessa, Thanks so much for the kind words. Yeah, I was going for artistic with this shot. It may not be for everyone which is what I’m hoping to find out by posting here. Do you love it or, what was he thinking? LOL

That’s an excellent portrait of the two birds, David. Beautiful.

…n 60 photographers shooting these birds and they have become almost oblivious to people. One of the juvis hopped up the hill to within about 4 feet of a photographer. Pretty crazy.Vanessa, Thanks so much for the kind words. Yeah, I was going for artistic with this shot. It may not be for everyone which is what I’m hoping to find out by posting here. Do you love it or, what was he thinking? LOL

Wow! That’s amazing the size difference I would almost think they were 2 different kinds of birds! I love your second photo from a documentary standpoint. That is so sweet how the male takes care of all of them. And I think that has it’s place for learning stuff. But the artistic side of nature photography is another way to express ourselves and share our view of the wonders and beauty in the world around us.

The frame doesn’t bother me, David. I like the original post but wish there were some way (Nnot sure what would work) to get more separation between the beak of the female and the juvie behind her.

Excellent composition. Although it might be nice to have more separation, this still works for me. The color and detail are superb.

Love the way you did this, the out of focus rear bird is not a hindrance as I feel it enhances the main subject. With both looking the same way there was no need to have both in focus, you get the idea that something off frame has caught their attention and you focus remains on the front peregrine. Very well done.
Alan

@David_Bostock, @Dennis_Plank, @David_Schoen, @alan18,
Thanks very much for your input on this image. I agree that it would be nice to have a little more separation but this moment happened so quickly that as it was, I only got 4 frames, and that was at 20 frames per second so I didn’t have an opportunity to move and because of the lens I was using, I was shooting wide open at f/8. Could I use some sort of blur on the juvi to make this better or don’t worry about it? ? Thoughts?

@David_Haynes I think you could achieve enough separation by increasing the exposure on the adult just a bit. The only place it’s bothering me is the beak, but the entire adult could stand a touch more brightness.

@David_Haynes I like it the way it is. I don’t think blurring the back bird will make that much of a difference.