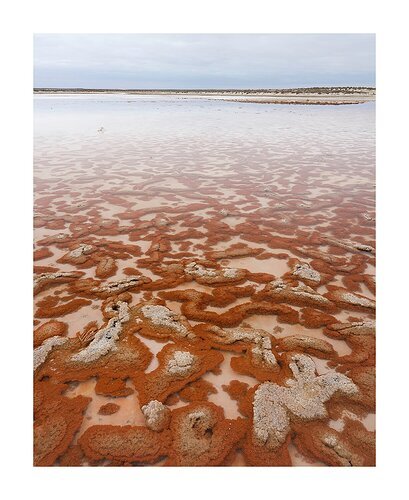 The last of this group of images was the first one shot. It was taken in an area where the salt tubes where the densest. I may make a triptych of these three images since they do form a group. We’ll see.
It’s a pretty forward shot without much for me to add. Let me know what you think.

Igor, I like to see the difference in making landscape images by you. The originality and creativity . So well made.

I think a Triptych is definitely called for here. These are all very intriguing images that make me want to look, explore, ponder. Great work!

I believe that I like this one the best. It has the most intuiquing foreground with a lot to look at and enjoy plus I like the high contrast producing vibrant colors. I think a tryptich would be awesome. You have three similar scenes but three different looks at them. I would put them in one of two ways. The high key to the left and this one to the far right, or, the high contrast to the left, the high key in the middle and the medium contrast to the right. Brilliant work Igor. I love the series. What a neat location. On this last image there is something out in the water that is sticking up that could be cloned out but it’s very small. Just grabs my a little tiny bit.

This one definitely grabs the eye with color. I love the way the deep color fades into the background water. I think the balance isn’t as good in this one as in the others because of the strong color - maybe there’s not enough blue to balance all that red orange. But maybe that’s me - I prefer more subtlety. These would make an interesting triptych.

This one was actually the easiest to compose because the red tubes formed a repeating pattern. Therefore most viewpoints were similar and I felt the only choices necessary were the dry areas that protruded from the bottom. I didn’t spend a lot of time on this one because the task was pretty obvious. Just a maze of red slowly growing to blue with distance.

Triptych? - Great idea. I think you have terrific subject matter and enough variance in each image to make that work.

I almost see this one as a combination between the previous two. At least in regards to the relationship between foreground and background. Here, while the “snakes” are densest, as you point out, they are also less distinguishable. Also, there is area midground where I think the connection between fore and aft is not as great. However, and what is appreciated about your approach and processing - is the subtle color gradation (red to blue, bottom top.) In other words, this and previous images, are not really about color, but about tonality and contrast. And you use that to great ends.

Thanks for sharing the series. Looks like a fascinating place!

As an alternative composition I think the bottom 2/3 of the image would make a great abstract composition.

I was looking forward to seeing the 3rd image in this series and I must say that I’m definitely not disappointed. I love the colour and the patterns.

The idea of putting photographs together is a really important one, Igor. To a certain degree, every photograph we take is a “lucky shot”. But, as with this collection even of only three, there is a meta story that you’ve clearly tuned into, that one photograph can’t tell and where luck has nothing to do with it. It’s the notion of meta composition and I’d really encourage going with the triptych idea. But even more, so many of your photographs share a point of view that is uniquely yours. To collect them and organize them so that they speak in a way that no single one can do individually would present your vision in a complex, dramatic fashion. As to this particular image, all I can say is, “yes!” It has a haunting feel that many of your images express. My only suggestion and a very minor one at that, would be to clone out that bit of brush in the upper left quadrant of the frame. I find it too small to add and too big not to notice.

Thank you for your comments and for those of you who encouraged me to do the triptych. I have gone ahead and made it just now. Each image has had less views than the preceding one. I think that’s due to the fact that it’s basically the same subject shown three different ways and the interest wanes as a result. I believe that that’s the reason rather than the quality of the work itself. Had I shown this in a different order the viewership would likely have been different.

Anyway, thanks for looking and commenting.

Happy trails to you …