Trumpeter Swans in the Fog 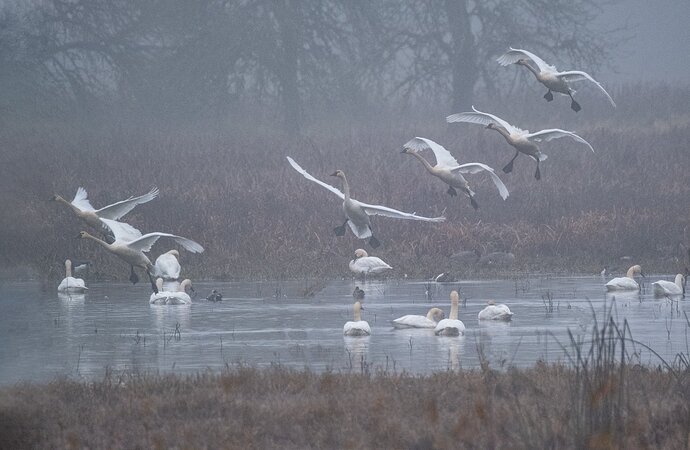 The fog adds a nice sense of mystery here, David. The action of the landing birds adds well to the peaceful scene. This brings to mind the magic and mystery of the swan based fairy tales.

Very nice, David. I didn’t even try the swans, but you managed to come up with something interesting. I particularly like the four incoming birds. It would probably take more Photoshop work than it’s worth, but this would look really cool with just the six active swans.

This turned out nice…the flight angle is about perfect coming in and all sharp…
Nice work freezing them at 1/125.

A fantastic opportunity and a great capture of the action, David! The fog really adds to the mood. There’s a lot of noise in the large version but still a surprising amount of clarity. What amazes me with this shot is that you have very little action blur despite the 1/125 shutter speed! I know swans don’t flap all that fast because of their wingspan but I still would have expected quite a lot of blurred wing tips at that speed. It’s almost as if they were gliding rather than flapping!