Which Came First, The Bittern or the Egg? 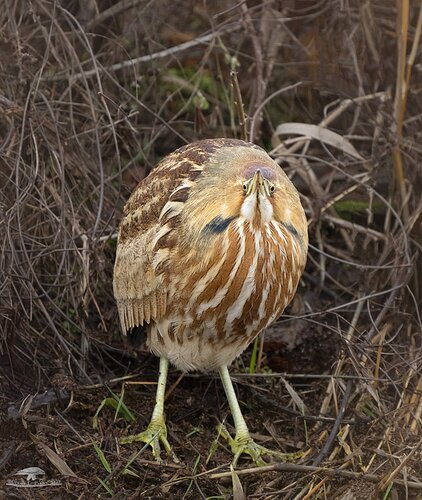 A friend and I went to a Southern Washington wildlife refuge yesterday and had two good sessions with this bird on successive circuits of the driving tour. This is from the firs session and it didn’t deviate much from this contracted posture. The heron clan in general seem able to adopt some poses that we find rather comical and I was trying to capture that aspect of the bird in this image.

The surroundings contained a lot of bright grasses that seemed to distract from the subject, and this image was, to me, all about the subject itself with little concern for habitat. I did a lot of cloning and added a blur vignette to thy to achieve that focus. I’d like feedback on whether I accomplished it.

It certainly looks like you have accomplished your goal. It is comical with the “Bug Eyed” look and…the main focal point is definitely the Bittern.
This one doesn’t appear to have that long iconic neck and maybe that’s because of the head on pose and maybe also because it appears to be a little on the fluffy side of fitness?

It looks like you could tie a string around its feet and pull it around like a helium balloon.

Yeah, the surroundings seem to melt away with this rare pose.

What a fun image!

Woah! Is this guy puffing up or something? I’ve not seen this before.
Awesome that you caught it in this moment. My eye gets locked on the Bittern, so I think you succeeded in minimizing the background.

I agree that you did a very good job on the background, Dennis. The title says it all - but I also love how much of that gorgeous plumage we can see in this pose. I noticed that after I’d stopped laughing.

Hi Dennis, I think you did well with capturing the bird in this pose and with your post processing. My understanding this species likes to stay hidden so this seems to be a rather open look for this bird. I have never even seen this bird so I’d say it is quite a special capture. Well done.

Hi Dennis, I am pretty sure I’ve photographed this guy in the last few weeks. There are at least 5 Bitterns in this refuge this winter.

I love the pose and the straight on look. Well caught. He’s definitely scrunched up and puffed up, likely due to the temperature.

They do look rather comical when looking straight on at you. I think you accomplished the humor. I also think you did a great job of minimizing the distracting background.

OMG this is hilarious! A bittern doing a kiwi impersonation. I am so jealous of your time with this bird. I’ve only ever seen them disappearing into the grass, but now I know where they hang out, I am going to see about stashing my blind in a good spot and maybe get something 1/2 as good as this.

Oh, too funny, Dennis! I love face-on shots of birds to begin with, and this was is really cool.

Odd looking birds, they are but oh so well fit for images. Priceless expression and pose. Nicely done! Cheers, Hans

Hi Dennis
I love it. Most of the time Bitterns are hard to spot, as the tend to blend in with their background. You can never pass up a shot like this.
Peter