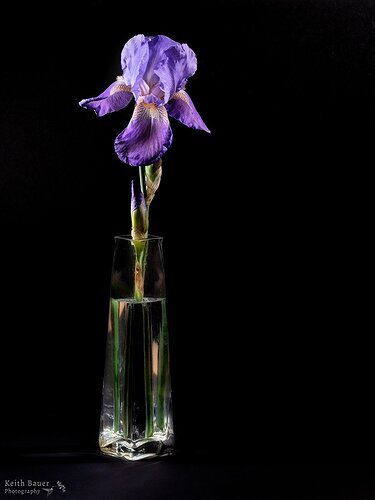 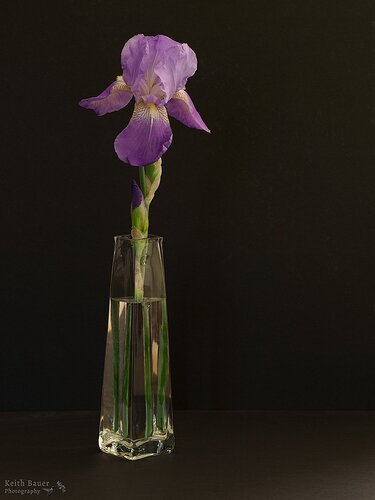 Thought I’d share this result of a bearded iris from this AM. This was set up in my house using black foam core on the table, and as the background.

The second image is exactly the same scene, just turned off the flash transmitter, and added a bit more shutter speed to meter somewhat close to what the ambient light needed.

I’m a big believer in the power of flash used correctly to create light where you want it. While these two images don’t even look like the same flower, I promise they are and nothing changed except the use of flash and a bit longer shutter for the straight ambient exposure. Nothing like getting the flashes off camera and working to create the light you want.

Keith, this is a nice show of the difference in the use of natural light and flash. Did you use a diffuser of any kind on the flash? For me, I like the natural light image the best. The light on the flower in the one with the flash seems harsh, in comparison to the one without the flash. Also, I suspect that the colors of the bloom is more closer to what you are seeing in the flower with the natural light. Did you mean to put this in macro? Just seemed like it might fit better in flora. I do appreciate you sharing this, as I use my twin flash outside in the garden a lot, and need to watch to make sure it doesn’t affect the colors, and look too harsh of a lighting. I try to make sure that my flash is on a lower power, and allow the natural lighting to be a part of the image.

Shirley: One flash had a large soft box, the other just a small diffuser on the flash. The colors of the flash image are far closer to the actual color than the ambient light image.

I moved it to Flora

Keith
I prefer the first one due to the
Quality of the light on the vase. Much more dramatic. If the flower was by itself, I would prefer the second one , although they are both very nice.
Thought for a minute you had light painted the first one! The set up with the foam core board is the same.

An interesting demonstration. Thanks for sharing. If this is the same species I’m seeing in Oregon, then the first one is pretty much exactly the color I’m seeing here.

The second one appears to have a more realistic feel to it than the first. I do like the punch of color in the first one…Jim

I do like the dramatic lighting in the first, Keith. Definitely a different color balance between the two but these shades don’t need much of a change to look completely different.

Keith: I think I’ll take one of each but if I could only have one to hang on the wall it would be the first. It reminds me of some still life images from Pat Sampson on the old NPN. Please take that as the high compliment intended. I just like the way the light treated the vase and the play of light and shadow. Superbly crafted images and thanks for explaining the lighting and setup.

What a difference the lighting makes! If I had to chose my preference it would be the second image. Much softer mood with the strong detail in the iris. Either image works, just a matter of what feeling you want to showcase.