Bursting through the fog 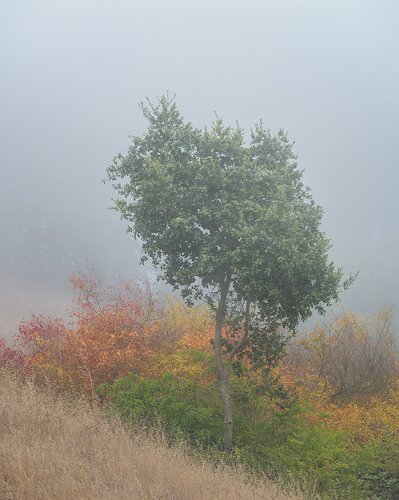 It is fog season in my neck of the woods (San Francisco) this time of year. A week ago the fog had settled in my neighborhood so I headed out to my local park. As I was walking around I came upon this scene, which was a bit of a surprise. Without the fog this tree is rather non-descript. Also, I was not expecting the colorful foliage surrounding it as we are also in the middle of our dry season (even drier than usual with the few years of drought). I tried to capture the feeling I had of this tree and the colors bursting through the fog.

The background is nearly concealed as the fog was quite thick. Is there, dare I say it, too much fog in this scene to make for an interesting image?

I pushed the white balance a bit cooler than how it was captured with the auto setting. I wanted to get a touch of blue to convey the cool temperature and feeling of the moment. Too much, too little, or just right?

White balance feels solid to me. I love how fog can transform a relatively ordinary scene into something really interesting. I think this image works nicely!

Who woulda thunk? SF? Yup, “The coldest winter I ever spent was a summer in San Francisco…” ~Mark Twain. And I’ll bet you’re tired of that old cliched quote too!

Lovely image. I especially like the variety of colors and it does come across as an autumn season scene. I could see cropping nearly half off the open space up top - but wonder if that would diminish the moodiness created by the fog. I do think the fog is present throughout and I also like the soft contrast provided. Just an alternate thought on the crop.

Need some of that fog over in the far East Bay!

Yo Dean! For me, the white balance is spot on. Really nice atmosphere and the colors look great. Wouldn’t change a thing on that front. I think this composition would look great as a 1x1 square too!

A real beauty, Dean. I think it looks great as is. White definitely looks good to me.

This is a real nice scene, Dean. Yeah those SF summers can be wicked.

But I love fog, so what can you say? This image works non so many levels mainly because there’s no background. The tree is nicely isolated, but accented by the shrubbery around it. Well seen.

A nice little scene. I like a lot the soft colors. The WB is OK. I am meaning towards the comment given by Lon to maybe crop a part at the top, on third of the distance between the upper border and the top of the tree?