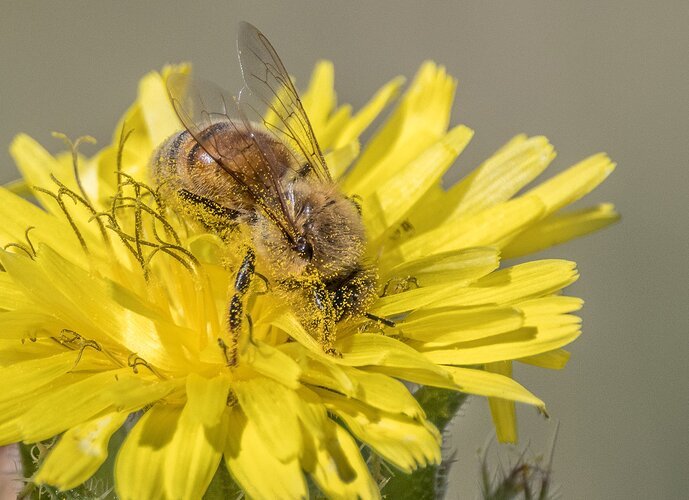 And after NR in PS with Topaz and some retouching at the bottom edge: 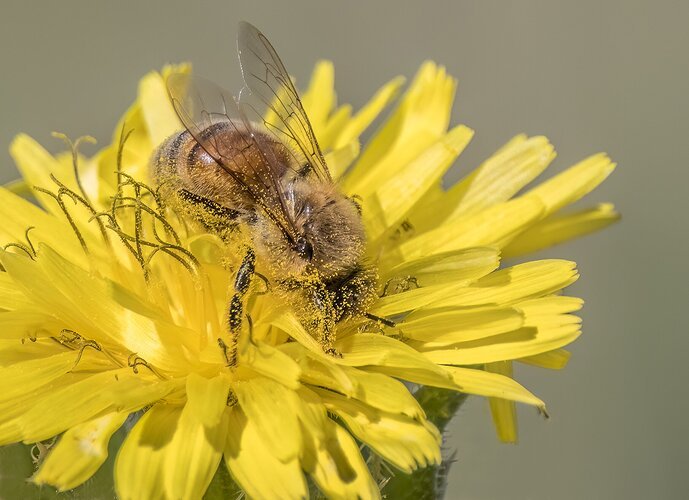 Thursday I went on a walk with a local Audubon group. The birds were not very interesting, and definitely not photogenic, but while the group was debating something in a tree about half a mile away this bee was working right at the edge of the trail. I tried a handheld shot and got lucky.

Diane, I agree that the long lenses can take good macros, especially if the subject is skittish or in a tricky spot, and this proves it. I never thought I’d say this to you: the BG on my monitor looks a bit, shall I say, grainy. But the pollen is gorgeously captured.

Yup, the long zooms are great for sneaking up on tiny things. I like the shower of pollen she has. The pale background sets off bee and flower nicely. In a perfect world I’d like to see this from a lower angle.

You caught me, @Mike_Friel – I thought I could get away with posting the raw file. The NR version is above. @Kris_Smith, I was afraid the bee would flee (and the birder group) so just did a quick draw from the Spider Holster, move a couple of steps to get the flower in the clear and fired off one shot. I didn’t consider a lower angle, possibly because the blossom was a bit cup-shaped and I thought the near petals might get in the way.

Awesome quick catch, Diane. I like the NR version as it’s nicely cleaned up. It also looks sharper, particularly on the pollen on the bee. Did you also add some sharpening, or is that a result of Topaz NR? I don’t have those plugins…

Thanks guys! @David_Bostock, the default NR values in Topaz have a bit of sharpening. There is a slider to control it but I never change it – it’s hard to see a difference if I move the slider. It’s a very tiny, pixel-level thing. I have Sharpen as well but almost never use it. With my sensor (R5), I find Texture in the raw conversion does better, or else the image just isn’t salvageable. I have gotten a slight improvement with a few images using the motion blur correction.

Love how the bee is totally covered in pollen, Diane. Very busy fellow. I also like the 2nd version, but did you also remove the small leaf (?) from the lower edge?

When you get lemons, you make lemonade, as in this case when the birds weren’t what you had hoped for, you found this nice little bee covered in pollen. Long lens do the trick for macro in many cases. Great shot. NR came out very well.

Hi Diane, I like the bee covered in pollen and working away on the flower. The clone job in the repost is an improvement. Nice catch with the long lens.

Diane: Luck comes to those who are prepared so I think you were nicely rewarded. The repost checks all the boxes for me. Nicely done.>=))>