Island in the Mist 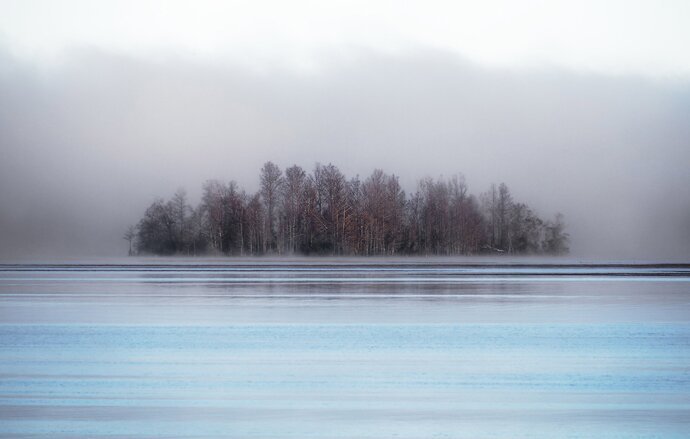 It was dicey timing to get this shot as the fog was rolling in and out as was the sun appearing, then disappearing. Not as much dumb luck as it was patience. I was waiting for a Belted Kingfisher to come up on my boathouse as he had for several mornings when this scene unfolded. Since I was shooting handheld and already had my settings in place, I left everything as is. The Kingfisher never showed.

I’ve reworked this image several times in an attempt to capture both clarity and softness and would like an opinion as to my success.

This is nearly SOOC. I did my preliminary editing in ACR and the rest in Photoshop but did little more than add a bit more clarity to the island trees and some cropping.

Hey Chris, I think the clarity and softness look pretty good. However, the darkness of the island makes it feel a bit jarring, and a bit too monolithic to come across as soft. To that end, I would almost like to see a photo of just water, clouds, and sky without the dark island.

When zooming in, I can see the fog on the water that you refer to, but viewed at a “normal distance” that doesn’t come across at all for me. The blue/cyan water in the foreground and the bright sky above the clouds (marine layer?) kind of dominate my attention when zoomed out. I think if you were to lighten the island up and dodge some of the light on the trees, that could put it more in line with the softness and fog you wanted to convey.

I would also consider cropping above the blue water and below the cloudtops, as those areas only serve to distract from the main subject. I think in order to make this shot work in a less-panoramic ratio, either totally still water or a really long exposure would be needed to visually simplify the lower section. Another possible way to frame it that would be to include a lot more sky and a lot less water, making it more about the airy vastness around the island. As it is, having the island right in the middle feels a little too on the nose for me, not because that’s always bad in principle, but because there isn’t really a framing element, nor natural symmetry, to justify that sort of centering.

I hope these thoughts are helpful! If my suggestions about “what could have been” are not what you’re looking for, I would focus on desaturating the blues, darkening the bright sky at the top, and lightening up the island.