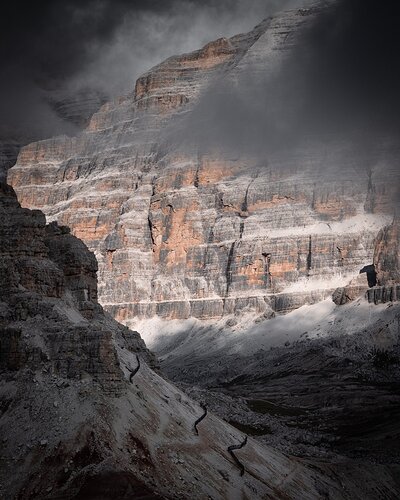 A weird title, I know. However, Lagazuoi is infamous for its wartime tunnels and WWI mine warfare. It also has huge historical significance for me as an Austrian, for obvious reasons. Maybe thats what drew me to this moody scene in the first place.

Martin, this is such a surreal image. The lighting only in certain places revealing the snow covered rock is really neat. The fog or low cloud cover is a nice bonus. Really nice shot.

the contrast and details are fabulous in this Martin. the opposing triangles of the composition are an excellent choice, and the fog/cloud enhances the mystery.

Martin, the ominous feeling here is excellent. You’ve handled the mix of light and dark and the low hanging clouds well. The layers of stone in the sunlit peak show well.

Hi Martin, this is a fascinating portrayal of a scene that obviously has a lot of meaning for you. I’ve never seen low clouds or fog so black before, and makes for an ominous scene, perhaps reflecting its history. Lots of interesting lines in here too. I wonder how it would look as a B&W? Well done!

Thank you very much for the feedback guys. This shot was taken at around 9.000ft above sea level which explains the spectacular clouds. I was thinking about a b&w conversion as well but I didn’t want to loose the warmth of the sunlight hitting the peak. So I instead opted for a more desaturated look, bordering on selective coloring.

Great shot, Martin! I love the drama and the movement elicited by the strong diagonal of the foreground landform. And I love the range of values. The sense of scale is pleasurably mysterious too, despite the obvious grand scale of the scene.

I wonder if the upper right cloud is a bit dark because it attracts my eye - what if it was more on a value scale with the shadow below it for balance?

Overall, though, I’m a sucker for a dramatic mountain scene and this image is way cool.