Probably one of the most elusive species for me photographically; not because they are hard to find but because I see them often but have never able to get anything decent in camera. I saw this guy on the same trail where I photographed “A tale of two friends” when I was hiking back to the trailhead. This was taken around sundown but the sun has already gone behind a hill long before that. I would love to photograph these guys in a good light for once. The original was underexposed and I decided to just leave it be and instead play with the highlight that falls on the bird’s face. I am looking to hearing your feedback and critiques. 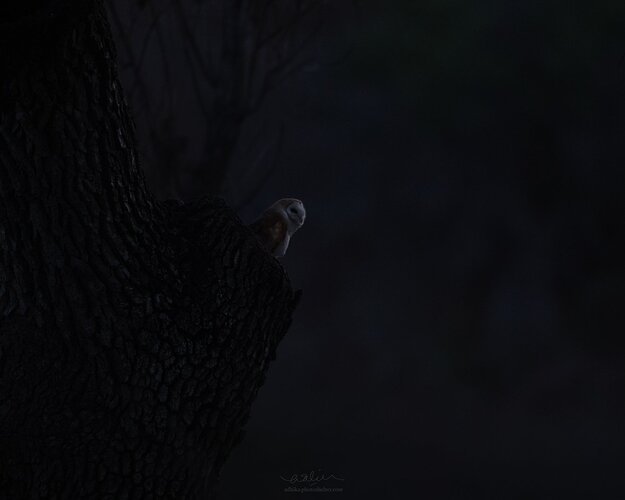 Revised with a raised exposure and slight dodging on the bird. 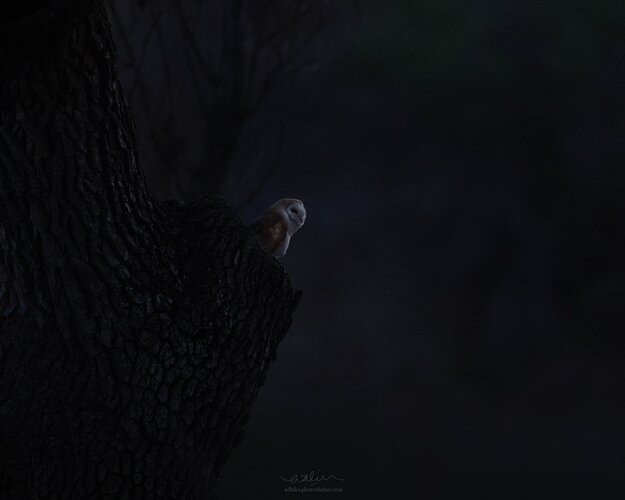 Well, this is certainly something different. I had to view this in a dark room to appreciate the tree. There is good detail in the owl. I think the photo captures the mood of the owl’s hunting environment. If you wanted to take some artistic license, I could see trying to place the moon in the upper right corner.

I love this image, Adhika. It really needs to be seen large and probably is best in a darkened room, but the faintly visible tree with the slightly more visible Barn Owl is just wonderful. Since most viewers aren’t in a dark room, I suppose you could increase exposure just the slightest bit, but I like this as posted. And don’t feel bad about lack of good light shots of these-we have nest boxes for them that have been used nearly every year for probably a dozen years and I can only remember having good light 3 times and one of those was because the parents were lost just as the young were fledging.

@Allen_Brooks, @Dennis_Plank: got it, thanks! Yeah, I think you are right. I edited this last night and when I viewed it again this morning, it does look a little dark with all the ambient light. I think 0.5 stop does the trick.

I think the photo captures the mood of the owl’s hunting environment.

I was initially a bit concerned about the owl being too small in the frame but when I started working on it, this thought came to my mind, too. Good to know that that story can be seen in the image.

Wow this sounds so much fun. Has other kinds of owl reside in that box as well?

As a side note, there are a lot of Western screech owls in this area, too. I kept hearing their bouncing ping-pong sound but I have never been able to locate them.

@Adhika_Lie We haven’t seen any other owls using the boxes yet. We put up a third on a local nature preserve and there are signs that other species might be using it. I haven’t seen a Western Screech Owl either. Some people seem very good at nosing out Owls, but I’m not one of them.

I like this as posted but it definitely has to be very large. The thumbnail doesn’t do this shot justice but I think you’ll get lots of people clicking on this to see what it is actually a picture of. That said, maybe just the smallest bump in exposure might help. I too seem to unlucky with these guys in good light. Not sure how you actually saw this owl unless it was flying and you saw it land. Great work. 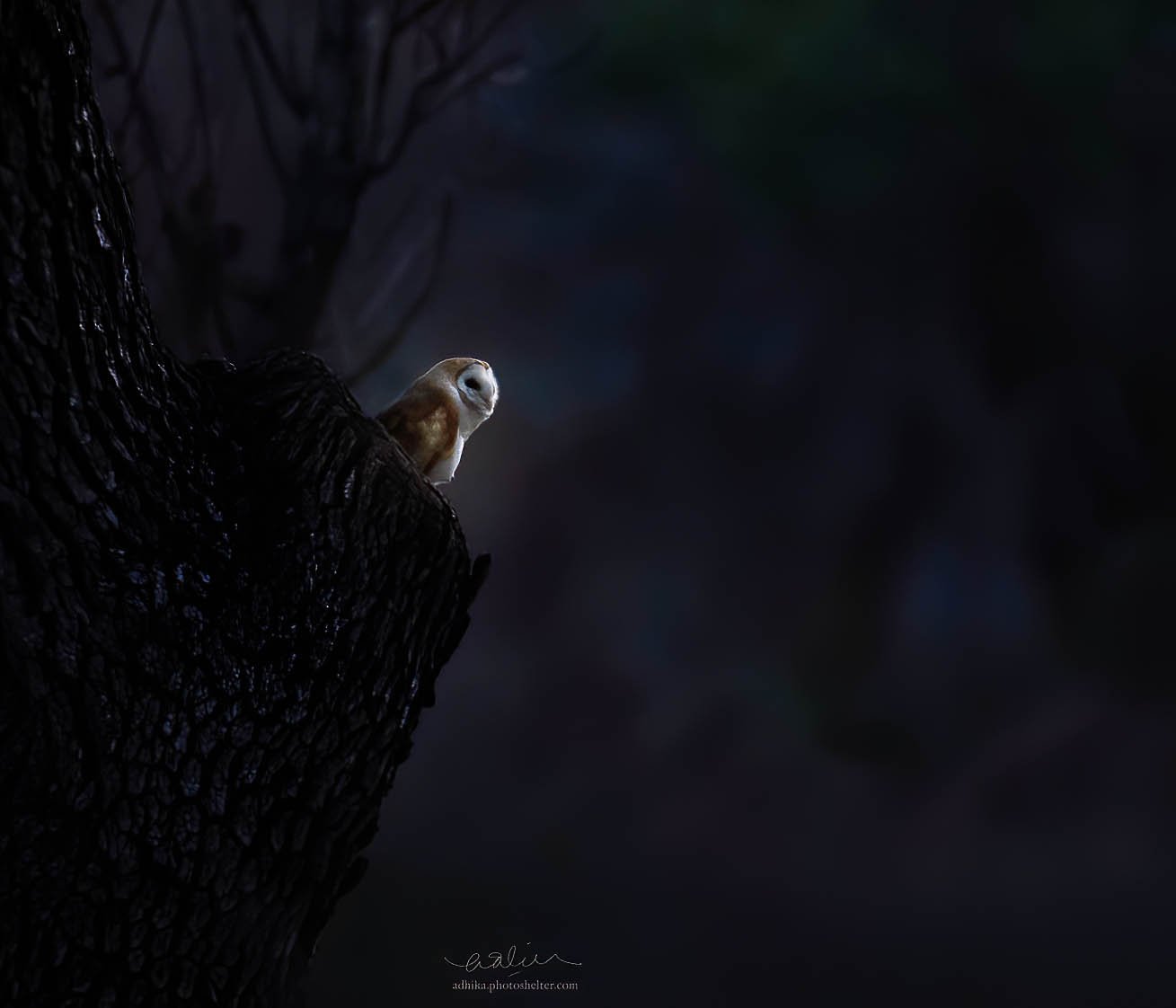 _5DS8904-Edit-r1309×1122 67.6 KB
I really love this image. I wish I had taken it. I don’t agree with your statement about not having good light for this subject. I think the light is PERFECT. I believe you can add some light to the subject and still maintain the mood. Here I increased the overall exposure 1 stop and then place a warm radial gradient with a soft light blend over the owl.
1 Like
Bonnie_Lampley (Bonnie Lampley ) June 13, 2020, 4:52am #8

Oh, this is very cool when viewed in a dark room! Maybe increase brightness just a tad and perhaps dodge the owl a bit, but not too much. As is, it evokes the feeling of walking at night and only faintly seeing your surroundings.

Good for you to see this owl out in the open. A really cool photo and certainly worth the time to look at some options. Kelly’s repost provides another nice look at it and a whole different feel.

This is a very unique image. Great concept.

I think I’d opt for a slightly brighter bird, but not as bright as the option Kelly Ireland suggested. Something in between maybe? Many varied options on this one. 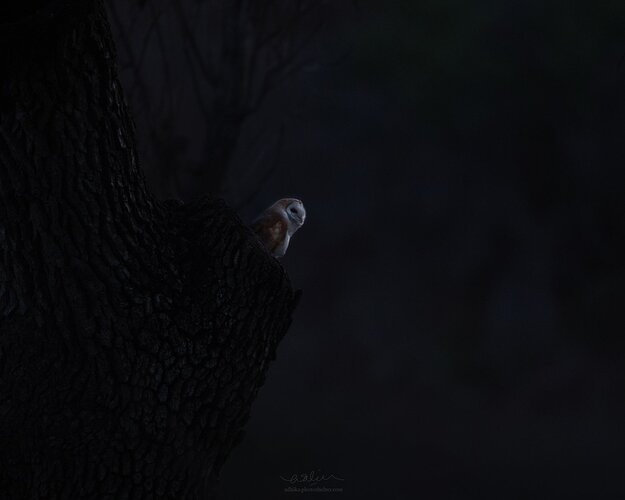 I really like the idea of brightening it just a touch and dodging the bird just a little bit. I also played with raising the contrast as suggested in @Kelly_Ireland’s rework but in the end, I feel that I am leaning towards maintaining a lower contrast to reflect the night scene a bit more. I think raising the exposure just a tad also brings out a bit more color to the BG especially in the UR which enriches the scene, I think. I have posted a revision to it in the original post.

Not sure how you actually saw this owl unless it was flying and you saw it land.

I have hiked this trail many times before and have seen and heard them flying around in this area so I know that they are there. I also know the cavity in this tree and every time I walk past this tree I would peek to see if one of these guys checked in this cavity to roost. This was just a lucky night for me. A few minutes later he took off to hunt.

The last revision done by Keith works best for me. If the owl is too bright, it looks a little flashed. Being able to see the outlines/silhouette of the trees and branches makes it more ominous. Very effective image. I don’t think a D850 or A7R4 would work as well in this level of light.

I really like your repost, Adhika. I think you just about nailed the brightness of both the owl and background for maximum impact. If you decide to print this, I’d be interested in any further adjustments might be required to make it work.