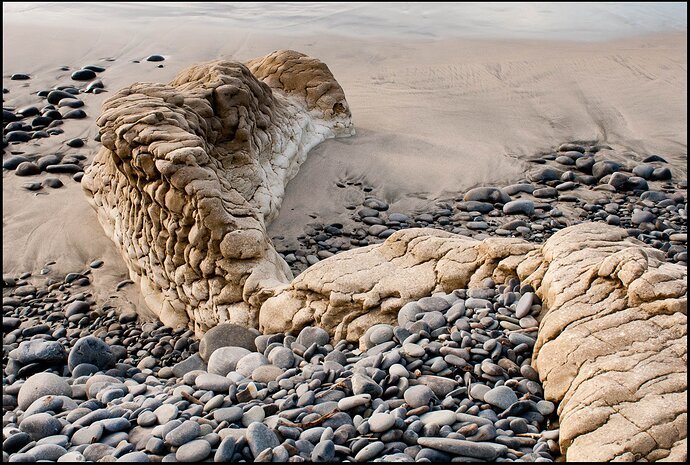 I found this limestone ‘sea serpent’ on a remote(ish) beach that has numerous and varied limestone outcrops that the sea has eroded into quite interesting shapes.
While walking down the beach the first time I didn’t really notice the serpent-like shape but when I returned walking along the high tide mark it became obvious that this poor serpent had been stranded by the greywacke stones and turned into limestone …or so my story goes!

This was such an unusual shape for a limestone outcrop on the beach that I felt compelled to photograph it. Just a bit of fun really, but I do quite like it all the same. I enjoy the way it curves nicely down the slope and the head is pointing toward its escape route into the sea.
Does the image support the story well enough to be interesting?

LR, PS for tonal adjustments and to clone out some wayward stones that seemed to draw the eye tword the top edge too much.

Phil: This is well seen and very nicely composed IMO. One can almost imagine the scales on the skin and the snout of the snake. Nicely done. >=))>

Viewing the thumbnail, I immediately thought “snake” - so your story definitely works. I like its “eye” and the contrasting colours of grey and beige. Your composition is excellent as it seems to be slithering down towards the sea. To my eye, an all-round success.

Without reading it and glancing at it quickly I honestly believed that I was looking at the head and neck of a dead camel that had collapsed and died in the desert.

Amazing use of composition to tell the story.

One thing I noticed is that the shadows of the rocks are totally black - I’d like to see a little bit of detail in there so I would use a dark 2 selection in my luminosity panel and then increase the highlights of the shadows a bit to lift them up.

Wow, this is awesome! What a great find! And kudos for seeing this.

I think we all see that creature - I’d say petrified? But rather than a serpent, snake or camel… I see a seabird - like an Albatross! But regardless, the story remains and we all see it. So very cool.

Awesome job with composing and presentation. The only tiny suggestion might be to burn down the lower “neck” or spine. The tops of the rock could be brought down in tone just a tad. In fact, maybe the gray rocks in the LL too. But both very minor and photographer’s choice.

Wow, most of us have come across neat and unique features along the ocean’s coasts - but this one has got to rank with one of the most unique - and cool.

Thankyou @Bill_Fach, @Mike_Friel, @Ian_Cameron, @Matt_Payne, and @Lon_Overacker for your very kind comments.
I almost split my sides laughing after reading Ian’s comment. Until, that is, I remembered that I’d cropped out the little bit of sea at the top of the raw file (a bit messy there). Thanks Ian…once seen as a dead camel I can’t seem to unsee it that way. Cheers.

I find it really interesting how viewers of the various photos on NPN see very different images in their minds. It is very good to get that sort of feedback because it reinforces the need for me to look at an image (unusual or abstract) several times (maybe several days apart) before posting in order to see it how others might. However I probably would have struggled to see this one as an albatross. Where I live, we have a royal albatross colony on a peninsula nearby and I’m sure they have wings

Thanks for the PP suggestions Matt and Lon, I’ll try those out shortly and post the rework. Cheers.

Well…here’s another one for ya, when I first studied it, the snout area with the dark spot of the right side as well as the swollen shape of it, the sharp rise in the forehead along with the roughness created by the rocks all made me thing of a mythical “Dragon” that had been slain and is currently sinking into the sand as it is becoming petrified, the brown tones made me think of a dragon as well because of the fire it once proudly blasted from its snout.

Then it made me thing of “Shrek”

Bet you didn’t see this turning into one of your most popular abstracts did ya?

I think the tones and the exposure level really set this off, Phil!

Whoa, this defiantly supports the story well and is interesting. I first saw it as a camel, but then the stones wouldn’t fit in so I can certainty see it as a serpent too. What a catch, Phil. There is so much detail in the head. It seems as if the stones are slowly burying the body. A wonderful unusual image!