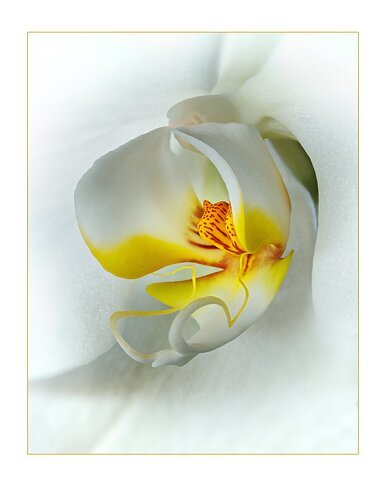 I shot several blooms at several different angles the other day, and had thought my previous post was the one I liked best, but now I think I prefer this one. I looked through my 2022 Favorites on my website and I think all had been posted here, so I’ll put this one up as my favorite favorite of 2022 and new material in the bargain. But I wish I had moved about 1/32" to my left…

Focus stack of maybe 25. Very little done in LR or PS except crop for composition, add frame, light vignette and a “digital fill flash” to brighten up the center portion.

OMG, woman, you have outdone yourself.
Jaw is dropped.
So creamy and dreamy.

Yep, that’s beautiful - almost like it’s emerging from a tunnel. I use Nik Viviza for a very rough “digital fill flash”. How did you do it here, Diane?

Awww, thanks @Kris_Smith – but really, it just a wimmen thing – you know that! I’m still hoping to capture a more lickable version… (I LOVE that term! Thank you for adding it to my vocabulary and list of characteristics to strive for in an image!)

Thanks, @Mike_Friel – I’m rushed for time right now but check my web site – there are some tutorials in the lower right of the home pg and a couple describe what the term is about. 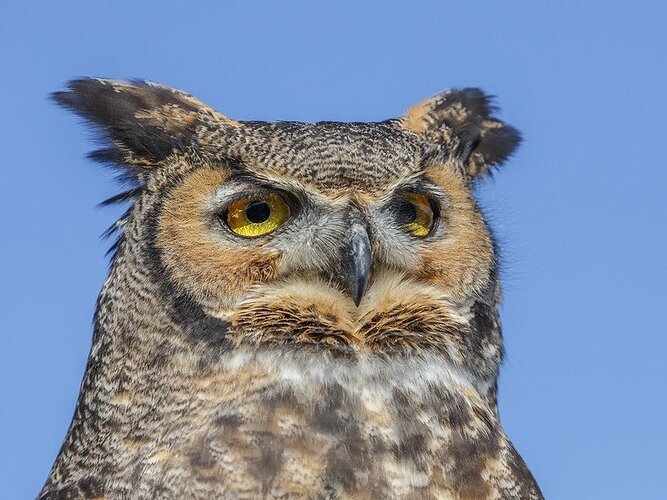 My web site for my fine art photography is: http://www.dianedmiller.com

Many thanks! Love the latest version of your website - will read all about it.

Stunning, Diane, absolutely stunning. . . and so inspiring. What a wonderful image to post for the end of the year.

Diane, this would make a fine left side “Bookend” to go along with your previous right side “Bookend” orchid image.
Maybe hang a series of your favorite images in a hallway with this one on the left end and the previous one of the right end? Just an idea, it may make people do a double take.

Anyway, this is another great orchid shot that is clean looking with lots of fine details and complimentary colors.

I understand why you would wish that but my first impression was that it’s well balanced as is.

BTW, I viewed you website and all of the work you have there is great!
I was emotionally struck when I viewed your aviation series. I’m sure that’s because I have a passion for aviation myself, I got my PPL in 1987 and have flown a clipped wing Taylorcraft many times. The one I few was aerobatics certified and I had a passion for aerobatics as well but in a purely amateur way, I knew what I was doing but it wasn’t professional or for airshows, it was just a lot of fun and a good challenge.
I still fly from time to time, just enough to stay proficient and current.

I had a chance to fly a Stearman but the owner ground looped it after landing where I was supposed to go up with him, lots of damage to the left wings and the left gear, too bad that happened but at least the owner/pilot was unharmed (except for his ego).
I never owned one, I just rented from my aerobatics instructor. and a local airport (KGSO) for travel style aircraft (a C-172)

Great aerial photo ops for you though I see!
I bet your husband is proud to have you get those shots of his flybys.

I like @Merv’s suggestion for bookend images. Works well. This one is absolutely stunning, Diane. I can’t think of any suggestions for improvement. It’s perfect.

Thanks @linda_mellor, @Merv, @David_Bostock and @StephenPrunier! Merv, I may have to think about a diptych for these – nice idea!

And Merv, cool about your flying! Just for fun aerobatics is, well…, fun!! We had access to a Great Lakes for a while before Ted got his Stearman. Our older daughter is a CFI and instructed aerobatics in a Citabria for several years during and after college, but when she got married she retired. When she applied for the job the owner had already interviewed three guys and decided to hire one, but he flew with her anyway – and hired her on the spot. A flight school some distance away was begging her to instruct in their 2-place Pitts, but she wasn’t interested in the commute. One day she was coming in with a student when a plane also coming in cut them off in the landing pattern – it was a very small airstrip where you fly by the rules to avoid midair collisions, period. The owner saw it and told us he started to come over to offer some assistance as she started heading for the other plane. Then he decided she wouldn’t need any help because she was leaving footprints in the concrete. It turned out the other plane was from an AOPA Air Safety program! The pilot was told to get out and never come back.

Wow, Wow, Wow!! What else can I say. Stunning!!! Magnificent job, Diane.

The owner saw it and told us he started to come over to offer some assistance as she started heading for the other plane. Then he decided she wouldn’t need any help because she was leaving footprints in the concrete. It turned out the other plane was from an AOPA Air Safety program! The pilot was told to get out and never come back.

Wow, I can see why the owner of the airport decided not to assist your daughter since she was mad enough to leave footprints in the concrete. I’ve had that happen too, and yeah, it’s enough to get ya riled up for sure.
Some so called pilots don’t seem to care about following the rules at uncontrolled airports, the rules for entry into the pattern and following the order in the pattern is there for everyone’s safety.
I would have reported that guy to the FAA, just because he may have represented or may have some sticker or card from AOPA doesn’t mean his judgement is any good.

I’ve dealt with quite a few instructors over the years, some for IFR training and IFR flight reviews, some for general BFRs as well as aerobatics proficiency reviews, etc. but the best instructor I ever flew with was a woman, in general, women are better pilots IMHO.

I’ve never flown a Citabria but I have flown a Super Decathlon quite a bit (very similar characteristics I’m told), the Clipped Wing Taylorcraft was less expensive to rent and almost as much fun as the Super Decathlon.

You guys stay safe up there, that’s one place to seriously watch out for the other guy (or “That” guy

Thanks, @Donna_Callais! @Merv, the hysterical thing about her as a flight instructor is that she’s 5 ft tall and weighs 100 lb and is cute and sweet as can be. My husband retired as a senior 747 captain and he always said the women pilots were better than the guys.

Am I allowed to hijack my own thread? (This is a UBF-7 they owned for a while.) 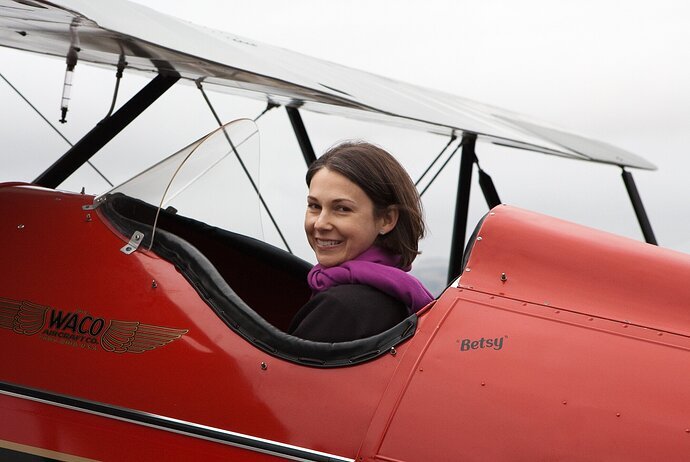 Thanks for the hijack. What a beautiful shot!

she’s 5 ft tall and weighs 100 lb and is cute and sweet as can be. My husband retired as a senior 747 captain and he always said the women pilots were better than the guys.

Your daughter, Annie, also has a nice debonair look about her (especially with her scarf). I can picture that scarf trailing behind her while wearing the traditional leather cap style headset and goggles

You’re not a proud parent are you?

I had a feeling that your husband was an airline pilot.
If anyone would know that women make better pilots, it would be your husband!

Thanks for the photo! Lovely looking Waco as well.

@Shirley_Freeman, many thanks for the EP!! What a wonderful surprise when I tuned in this morning! Now that the holidays have settled down and the much-needed rainy season has settled in, I need to do more macro work.

Diane, I am not the responsible Moderator this time, I think it is Mark Seaver, as it is in the Weekly Challange category. I’m glad you called it to my attention though, because somehow (probably lack of time) I missed commenting on this lovely image. Excellent shot and I can see how it made EP!

@Shirley_Freeman – apologies – I obviously forgot where I entered it!