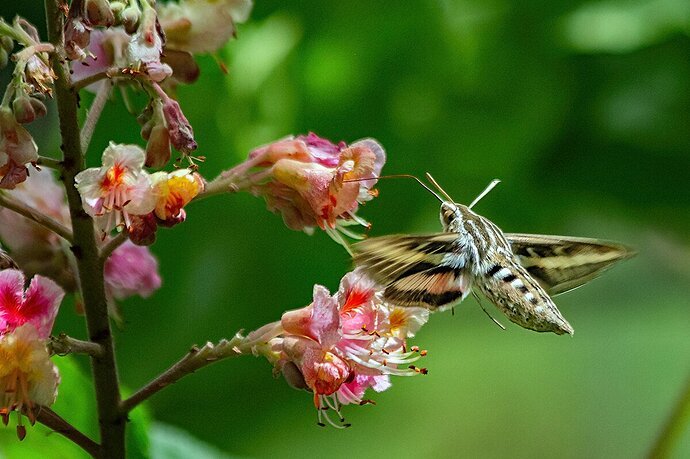 The white-lined sphinx moth, Hyles lineata, is a common sphingid moth that occurs throughout most of North America, from southern Canada down to Central America. It has long, narrow, triangular forewings and shorter hindwings, with a wingspan of 2½ to 3½ inches. In poor light they can easily be mistaken for hummingbirds as they hover at tubular flowers, sipping nectar with a long proboscis, and are especially attracted to scented flowers. This one is nectaring on a Red Horsechestnut in my yard.

An interesting side note is that the caterpillars were once used as a food source by Native Americans. When abundant, the Cahuilla and Tohono O’odham collected nearly mature caterpillars feeding on sand verbena and other plants in the Southern California and Sonoran deserts. They pulled off the head and jerked out the guts, then placed the larva in a bag or basket. In the evening the insects were roasted, skewered on a stem, for a feast. Leftover caterpillars were dried over hot sand from a fire, then stored either whole or ground up. – Susan Mahr, University of Wisconsin – Madison

Nice shot, Terry. Wow. Great shutter speed too. Awesome all the way around.

Terry, this is a nice shot of guy. Very nice details in the subject, and you captured him getting the nectar. Just enough motion in the wings to indicate movement, which is nice.

Amazing capture, Terry. I have attempted to photograph these couple of times with disastrous results. They are so fast! Great details and beautiful colors. Thanks for the history & background.

Thanks all.
@David_Bostock Thanks for your kind comments.

@linda_mellor Thanks, Linda. They are, as you say, a fast, tiny target. I deleted a lot more photos than I kept!

Terry: This is just superb. I love the comp and the DOF and the supporting elements of the flowers. Most excellent. >=))>

Hey, Bill. Thank you for the detailed comments. I appreciate it. Glad you like it.

I didn’t get to this earlier, but have to add how much I like it – the detail on the moth is wonderful! I could see another version with most of the tree on the left cropped off and a bit from the top to remove the piece that would be in the corner. I think the two flowers would look OK just coming in from the side. Also cleaned up the bottom corners. 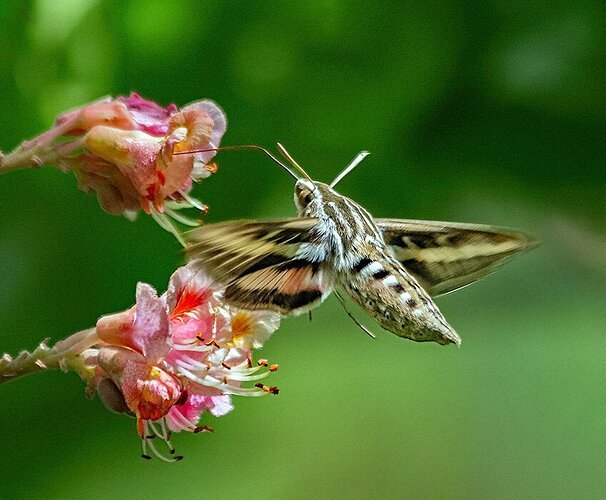 Yes, @Diane_Miller, I like this “cleaned-up” version, too. I guess I’m a sucker for perhaps leaving too much of the environment in a photo. When I see two flowers just hanging there, it makes me wonder, “What are they attached to?” But that’s probably just me. Thanks!